Electricity Use and Cost

Whether you already have a window air conditioner or are shopping for your first one, you know that it will use energy – specifically, electricity. The average amount that we spend on electricity per month in the U.S. ranges from $85 to $150, which amounts to a little over 2% of average annual income. How can you know that the AC you purchase will not “break the bank” when that utility bill arrives?

The primary number most people look at on a window AC unit is the BTU (British Thermal Unit) output. This tells how much cool air it is capable of producing (really, how much heat it removes per hour), and the approximate size space it will cool. Most window ACs have a BTU rating of between 6,000 and 24,000, though some are even larger.

BTU doesn’t tell the whole story. How much electricity does it use to “move” those BTUs of heat? What is its efficiency?

What is CEER Rating? CEER Definition 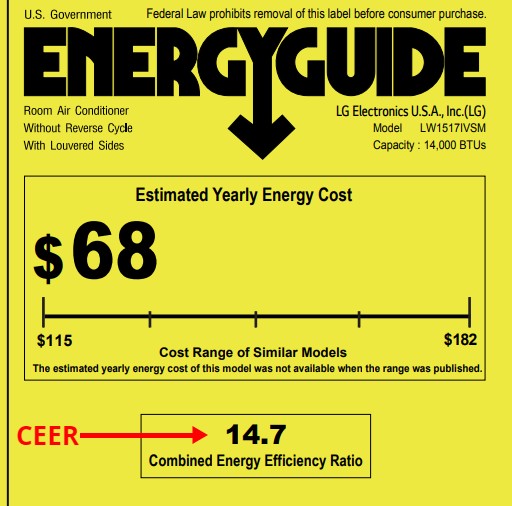 Since June of 2014, the DOE (US Department of Energy) has changed the way they rate window air conditioners, and you can use this information to compare one model with another to make sure the one you choose will give you the most bang for your buck. Some are even Energy Star certified.

What’s the Difference Between CEER and EER? What about SEER?

EER has been used to measure the efficiency of many home appliances since the rating was started in 1975. For a window air conditioner, EER is measured under certain conditions: Outside temperature of 95F, inside target temperature/thermostat setting of 80F and a specific inside humidity of 50%.

The EER ratio shows how each room or window air conditioner cools under those conditions. But AC units have changed over the years. In short, they use energy when plugged in even when the air conditioner isn’t running. This has necessitated a change in how they are rated to give consumers a more accurate measurement of how much energy they use.

SEER is similar to EER, except rather than using just one specific outside temperature in its formula, SEER calculates how efficient the unit is during various times within the cooling season. In other words, the unit is tested while pulling in outside air of differing degrees and taking an average of the results for the SEER number.

CEER uses a similar set of factors to come up with how well it cools when running (as do the first two ratings), but it also factors in how much energy it will use when in Standby mode. In other words, it measures the “combined” efficiency of the unit when it is actively cooling a space and when the power is on but it is not cooling.

Standby vs Off Power

Not exactly. Many window ACs have an integrated programmable timer, a clock, remote control capability, digital temperature display and so forth. All of these features draw a small amount of power whether the unit is on or off. In many homes, the unit is usually plugged in 24/7, so the standby energy use adds up over time. Since these features are relatively new, and since they affect overall efficiency, we now have the new efficiency rating to help us when choosing a new unit using factors that the older rating system didn’t use.

How is CEER expressed?

CEER is expressed by a number. Generally speaking, the higher the number, the more efficient the unit will be. Most popular window AC units range between 9.8 and 15.

If you want a unit that also meets the Energy Star standards, which are least 10% more energy efficient than the minimum federal government standards, here is a chart that you might find helpful. It considers the fact that units get less efficient as they get bigger. Energy Star recognizes that, as shown in the chart.

The Larger the AC Unit, the Smaller the CEER Number

As you can see in the chart, the larger the AC unit, the smaller the CEER number. This means the larger units are not as efficient as the smaller ones. But you may need a window AC that will cool a larger space, and purchasing the proper size unit for your space is very important. When you determine the size you need for your room (BTU output), make sure you only compare other units of the same size when looking at the CEER.

When shopping for a window AC, the CEER number might be found on the yellow Energy Rating Label. Remember, a higher CEER number means greater efficiency, that is, less energy use and lower electric bills. Greater efficiency means that your AC unit will not only provide you with nice cool air, but it will do it for less money than other units of the same size.