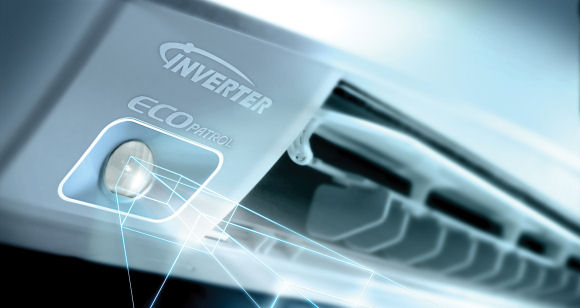 What ACs and Heat Pumps Have Inverter Technology?

Inverter technology was developed for mini split air conditioners and heat pumps in the 1970s and 1980s. Almost all mini split systems from all leading brands have inverter-driven compressors. It is the industry norm.

In about 2013, a few brands began introducing standard AC and heat pump models that included inverter technology. Carrier Greenspeed was among the first, followed by units from Lennox, Trane/American Standard and Bryant (Carrier’s sister brand). The technology is also called variable-capacity, variable-speed and modulating when applied to standard split systems. The industry has also begun to use the same terminology – inverter-driven – as in the mini split market.

Inverter technology is not yet the norm for standard split systems. Most brands still produce single-stage and two-stage models too.

Note for clarification: You’ve likely noticed that we are using the term standard split system to refer to full-size central ACs and heat pumps. We use mini split to refer to smaller units that don’t require ductwork but do require one or more indoor air handlers to be installed in zones.

What is an Inverter AC?

An air conditioner or heat pump fitted with an inverter-controlled compressor is one that varies its output from about 40% to 120% of rated capacity.

There are three compressor options for central air conditioners and heat pumps. A compressor regulates the flow of refrigerant. The faster the flow, the more heat is moved from inside to outside in summer.

If you drove your car as fast as it would go for 5 miles, then turned off the ignition and coasted to a stop, and then repeated that cycle, your gas mileage would be terrible.

When your AC runs that way, it uses a lot of electricity. Plus, it cools a few degrees past the thermostat point because it’s running at 100% when it hits it. All the cold air still in the system is blown into your home. These are reasons most single-stage models are 13 SEER to 15 SEER, though a few are more efficient.

The two stages or refrigerant flow speeds are 65% (stage one) and 100% (stage two) in most models. They run on stage one most of the time. This is more efficient and maintains better temperature balance than a single-stage model.

Two-stage compressors kick into stage two when a significant boost in cooling is required by quickly rising outdoor temperatures that heat up your home or when you drop the thermostat setting by 4+ degrees.

65%, 100%, off. Repeat. Using the driving analogy: Drive fast. Drive very fast. Coast to a stop. Repeat. Usually 8-12 times a day. Cycles are a little longer, but still quite frequent.

When inverter technology is used, electricity is sent to an inverter first. The inverter regulates its frequency – how much of the electric power reaches the compressor. In turn, that regulates the speed of the refrigerant flow.

Arizona contractor Magic Touch Mechanical explains the advantage of variable capacity cooling in a very warm climate, “In Phoenix, Arizona you may need a 5-ton unit to handle the load in mid-July when it’s 110F outside, but what about in September when it’s only 90 degrees? You still need to run your cooling system but maybe the load is now only 3.2 tons. With an inverter driven variable speed compressor you only use what you need, thereby saving you money by not consuming energy you don’t need.”

The inverter difference: An inverter-driven compressor rarely shuts off, so it is always ready to speed up or down to match heating or cooling demand. It adjusts in increments of 1% or less to exactly match cooling requirement. Cycles are slow, vary slightly as needed and are continuous.

This makes them very efficient. And temperatures are very balanced. Other advantages are discussed in the pros and cons below.

If you’d like more details on the technology behind inverter compressors, this post by industry leader Daikin has plenty.

Here’s a review of those we’ve covered and a few more advantages and disadvantages of inverter-driven compressors.

ACs and heat pumps with converter-controlled compressors have efficiency ranges from about 16 SEER to 38 SEER compared to 13 to 18 SEER for non-converter units. This chart sorts it out.

We’ve said there’s a cost premium for the efficiency and indoor comfort that comes with inverter technology. But how much more does it cost?

Payback Period – Is it Worth It?

The payback period is the time required to recover higher equipment costs through lower energy bills.

15 SEER vs. 30 SEER – Single Zone: If you spent $1,750 more on the 30 SEER single-zone mini split, your payback period would be just 35 months – a month short of 3 years. But there is one important issue here. A 3-ton single-zone system would be suitable for one large room. If your home has a very open floor plan, it might work for all but the bedrooms. Most homes require multi-zone mini split systems to maximize comfort throughout the house.

15 SEER vs. 30 SEER – with 4 Zones: You might spend $4,000 more on a high-SEER multizone mini split system. At $50 savings per month year-round, the payback period would be more than 6 years, 8 months. That’s still a relatively short time when you consider a heat pump lasts up to 20 years.

When It’s Not Worth It: If you live in a very moderate climate, your savings might be less than $15 per month. This will make your payback period much longer, so might not be worth it. For example, you won’t recoup $4,000 in the life of the system at $10 per month.

Which Inverter System is Best for You?

There isn’t an answer that works for every situation.

Here are several common scenarios that can help you decide.

Your options are wide open. A zoned mini split system will cost significantly more for the equipment and installation. Having an indoor unit (air handler) in each of the four zones is slightly louder too.

Secondly, if you choose a high-SEER mini split, you might cut heating and air conditioning costs by as much as 33% compared to a standard split system with inverter technology.

Our suggestion is to get several estimates on each type system so you can compare them head to head for cost, efficiency, sound levels and other features. If price isn’t the biggest concern, choose an installer you believe will properly install the system, a vital aspect of how it will run in the years ahead.

A standard heat pump system attached to your ductwork will cost significantly less than a zoned mini split system with 4-8 indoor units, each $650-$900+ to install. Your efficiency might be lower, based on the systems you’re comparing. That’s something to consider. If you decide you want maximum efficiency, consider a ducted mini split system. The technology is the same, but the indoor units are hidden in existing ductwork near the vents.

Homes built with boiler systems don’t have ducts. If the boiler system is being replaced with a heat pump system, a mini split ductless system is your best option. Adding ducts to an existing house is very costly, invasive, messy and time-consuming.

Finishing a basement or attic? Turning a garage into living space? Adding a homeowner bedroom (aka master suite)? A single-zone mini split system is a great choice.

Do inverter-driven compressors use 50% less energy?

Various HVAC manufacturers claim inverter technology cuts energy use anywhere from 50% to 64% compared to single-stage compressors. Are these just wild marketing claims or are they research-proven?

Air conditioners and heat pumps with an inverter-driven compressor dramatically reduce energy use. The tradeoff is a higher price tag for the unit.

Is an inverter-driven AC or heat pump worth the cost?

How soon will lower energy bills pay for the high-priced equipment? The payback period varies from a few years to “never” based on how heavily the AC or heat pump is used.

Indoor comfort is another factor to consider along with cost. Many homeowners want the precise temperatures and better humidity control inverter systems offer regardless of price.

4 thoughts on “What is an Inverter Air Conditioner? – Pros and Cons”