There are many situations where ducted heating and cooling solutions are not a viable option. Smaller and older homes are two examples where retrofitting ductwork into the building may not work because of space or noise concerns.  In situations like this, radiators, electric heating plates, and window air conditioning units used to be the only real options. The Japanese market, with restricted living space and constant cost concerns, led to the development of the ductless heating and air conditioning solution sometimes called a mini-split AC/heat pump.  The success of these systems in Japan has led to their use in other parts of the world and are now available in the United States.

What is a Ductless (Mini-Split) AC/Heat Pump?

A small condensing unit containing the compressor is placed outside the home. Rather than ducting treated air through various parts of a home, the ductless AC/heat pump splits the coolant line for distribution to fan coil units located in various rooms. This is why they are often called mini-split AC/heat pumps.

These units take up significantly less space than ductwork inside the home, making them an ideal solution for some small living spaces.

Parts of a Ductless AC/Heat Pump 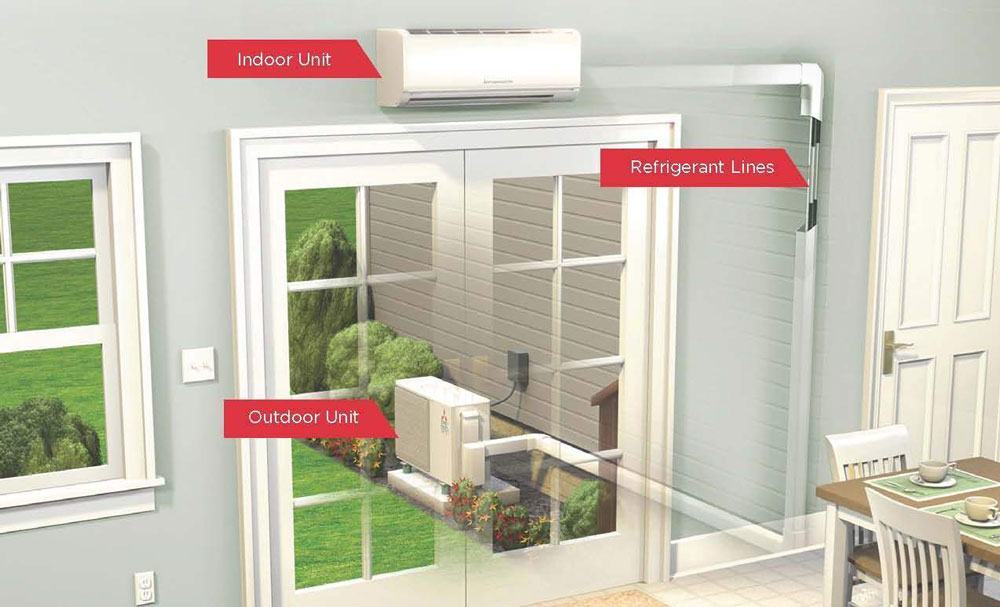 The unit consists of four main parts, each of which plays a role in the energy efficiency of the entire system.

One important advance in the design of ductless heat pumps is the use inverter technology. Inverters allow the compressor to operate at a variable range of speeds, adapting to the situation, rather than settling for a speed a bit too fast or slow for the situation. That improves energy efficiency, allowing just the right amount of heating or cooling based on demand.

Some units come with optional features that may be suited to your unique situation or just nice to have.