Capacitors found in HVAC systems come in a set range, although many homeowners believe there is just one style of capacitor. Well, not all caps are created equal, and understanding the differences between them can help you diagnose some problems beforehand.

What is a Capacitor?

Capacitors are found in almost every type of electronic device you can imagine. You can find capacitors in television sets, cars and even calculators where they are incredibly common. These little devices are a vital part of millions of products, as they are used to store electrical energy similar to a battery.

Two plates inside a capacitor hold opposite charges and are separated by an insulator known as a dielectric. When power is run through a capacitor, they will build up a charge which is converted to energy which is released to an electrical circuit that performs an action. In the HVAC world, capacitors are typically found on outdoor AC units, heat pumps and furnaces.

While an AA or 9-volt battery is something you can hold and easily remove from a device, capacitors in an HVAC unit may need to be discharged. Otherwise, you run the risk of an electrical shock or burn if you handle it improperly as they can hold a charge for some time.

Capacitors can come in a range of sizes but are basically used to help “kick start” components in an HVAC system. With that in mind, all fall under two categories and start capacitors are found on compressors, while run capacitors can be used on fan and blower motors along with the compressor. Below we’ll discuss the three common types of AC capacitors you’ll need to be aware of along with a few interesting variants.

Single Run Capacitor– Commonly found in furnaces and smaller HVAC systems, a single run capacitor keeps things simple. It has two terminals, and while they come in varying sizes, they can only power a single motor.

AC Start Capacitor – As the name implies, an AC start capacitor has one purpose – to get your compressor up and running quickly. Start capacitors have two terminals and are found on both heat pumps and air conditioners. A Super Boost Capacitor is another style of start capacitor in this class, but with the potential relay built-in.

Dual Run Capacitor – Dual run capacitors are essentially two capacitors in one and run continuously with a system. They are easier to identify than a single run or start capacitor as well considering they have three terminals on the top. These capacitors are generally found on premium systems and support both the compressor and fan motors.

What happens when an AC Capacitor goes bad?

Once you understand the type of capacitors used in central heating and air equipment and what they do, it’s time to think about what happens when one goes bad. Depending on the type of capacitor used in the system, the lifespan on this particular part may only be a few years.

While you can read more about how to diagnose a bad run or start capacitor in our guide, the thing to remember is to address the issue promptly. If not, you could end up with costly repairs from burned out components in your HVAC system.

Differences between Start and Run Capacitors

Capacitors come in all shapes and sizes, which can make identifying them challenging. While the main difference between these capacitors is what they control, it’s far from the only thing you’ll need to be aware of.

A starting capacitor is only designed for a short burst of energy so it can boost the motor up to speed before being disengaged by a circuit. They also are listed in size by a specific uF range that starts at 70 uF or higher. Notice how the terminals on top of these two capacitors are different? That’s because the one on the left is a start capacitor for single-phase units while the capacitor on the right is a dual run capacitor. 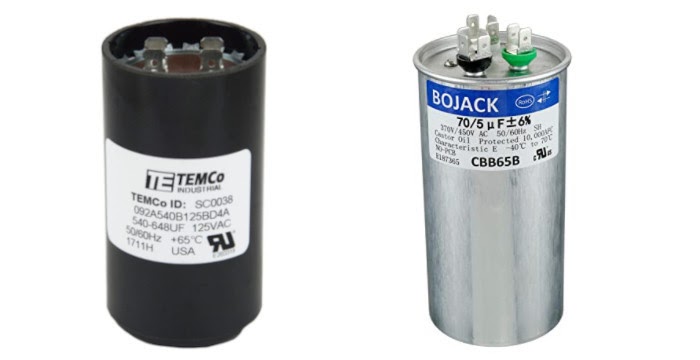 Run capacitors keep power while the motor in an HVAC system is running and are rated from 3-70uF or microfarad. The voltage classification is slightly different as well, and sizing is crucial for maintaining an even magnetic field. Wondering if a run capacitor can be used in place of a start capacitor?

It’s possible in some circumstances, but only if the voltage and capacitance ratings are an exact match. You cannot use a start capacitor as a run capacitor, however, as a start cap can’t deal with a continuous amount of current. In either case, using the wrong type or size of capacitor can damage your system.

Q: Will a capacitor leak?

A: When damaged or put under heavy loads for extended periods, electrolytic capacitors can rupture and leak fluid.

A: No. While they can be used in a circuit that boosts voltage, a capacitor itself does not increase voltage.

A: A dual run capacitor is just two single runs in one housing which is designed to save space. If you have enough room and can’t locate a replacement for a dual run cap, you can use two separate ones.

Q: Does the style of casing on the outside of an AC capacitor matter?

A: The design will not affect the performance as long as it’s a high-quality capacitor that’s been installed properly. Round styles are more common than oval, however.