Zoned heating and air conditioning should reduce total energy use and cost while precisely controlling temperature in each room or zone. 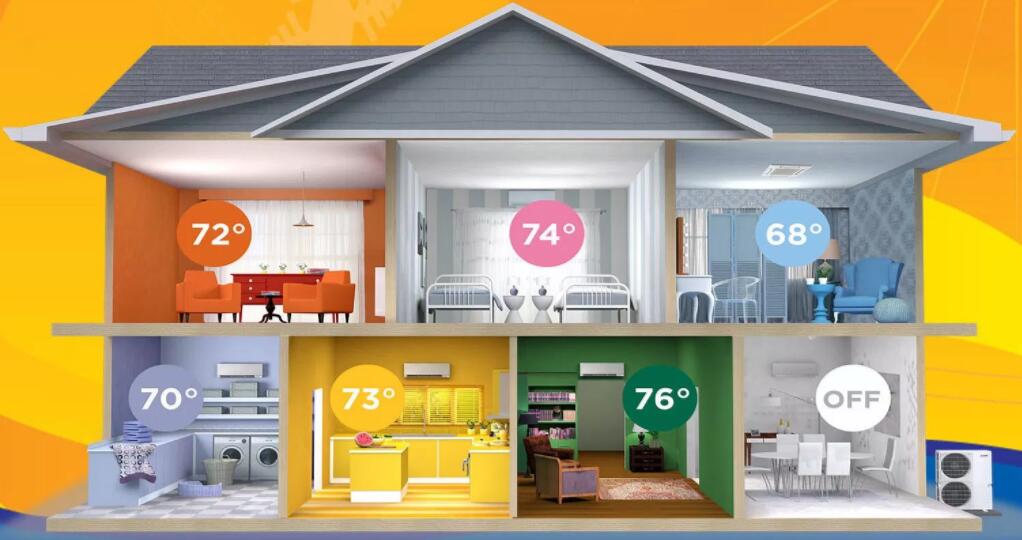 Those are the points in favor of zoned HVAC.

The downside is initial cost, typically ranging from $2,000 to $3,300 depending on the number of zones. That’s just the cost of the zoning equipment and installation. If you replace HVAC components, cost will be much higher.

Complete HVAC zoning cost is below.

Beyond the expense, there’s another potential problem: A poorly designed zoning system can waste all the potential energy efficiency it is designed to create. More on that under Good and Bad Design.

Now, with the cons of zoned heating and cooling out of the way, we’re happy to report that a properly designed system will pay for itself in energy savings. And being more comfortable in the various zones of your home is always nice.

What is a Zoned HVAC System? 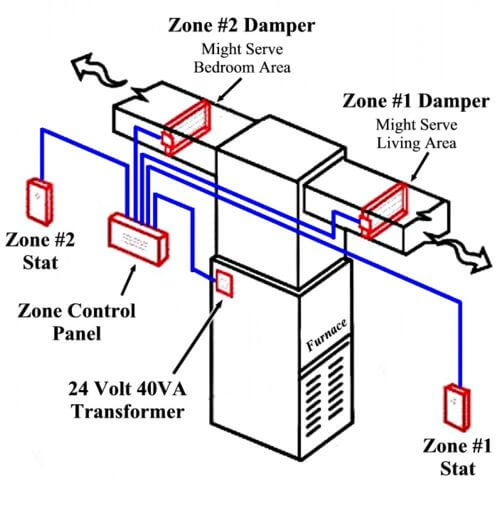 A zoned system is a single HVAC system serving two or more zones, rather than two separate HVAC systems. Its components are:

1 HVAC system: A furnace combined with an AC, and a heat pump and air handler are the two most common.

1 to 20+ motor-driven dampers to control airflow to each zone: Depending on the ductwork design, the system might require a damper for each major branch off the trunk or smaller branch. One of the advantages of installing a zoned system when the house is built is that it can be designed with fewer dampers than a retrofit often requires.

See our Ductwork Buying Guide for information on ducts and how they function in an HVAC system.

Dampers can either be controlled to open fully or close, or a modulating controller can be installed at additional cost to open dampers partway to meet the heating and air conditioning demand of each zone.

Temperature monitoring and control in each zone: There are several ways to monitor and control zone temperatures.

Option 1: Thermostats – The simplest method is to have a thermostat in each zone that both monitors and controls temperature. 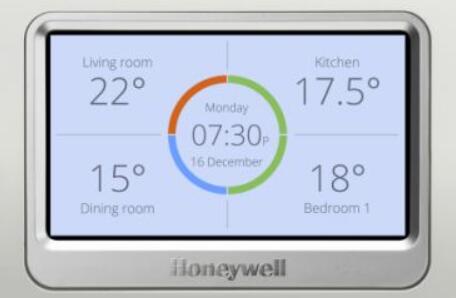 The advantage of a multizone thermostat is that you can control the entire system from one location rather than having to go to each zone to adjust the thermostat. Of course, any single or multizone WiFi thermostat can be controlled from anywhere with an app and smart device.

An HVAC professional with good experience installing zoned systems will offer sound advice on the best mix of sensors and thermostats.

Damper control panel: This panel receives information about the desired temperature in each zone. It then controls the dampers to produce airflow that satisfies the heating and cooling in each zone.

Wiring/wireless: Dampers are usually wired back to the control panel. Sensors and thermostats can be wired or wireless.

We’re not promoting Trane over other brands, but this page does explain the types of equipment used in a zoned system.

An HVAC system that isn’t zoned heats and cools every area of your home whenever it is running. It’s a little like having all your home’s lights go on when you turn on any light. The electricity used for lights in unoccupied rooms is wasted.

The key to energy savings using a zoned system is reducing or stopping heated or cooled air going to unoccupied rooms. For example, heat to the bedroom zone might be set to 60F during the day and 72F at night when the living areas are turned down to 60F. As you can imagine, programmable thermostats offer convenience in a zoned system.

When done properly, zoning typically reduces energy use by 20% to 40%. The average for most homes is 30%. The more extreme your climate’s temperatures are, the sooner a zoned system will pay for itself and start really saving you money every month.

Energy savings are accomplished in a zoned system by reducing the HVAC system’s output. Therefore, good design starts with a two-stage or variable-capacity HVAC system.

Systems with two stages run at 65% capacity on low and 100% capacity on high. Therefore, consider what happens if you reduce the demand for heating or cooling in various zones by one-third, so that your home will need about two-thirds (66.7%) of the system’s capacity. That’s close to 65%. The system will run on low stage most of the time, effectively reducing energy use and cost by about a third.

This pdf can be used to illustrate the point. The ductwork is split to serve three sections of the home. Without zoning, each section would get about 33.3% of the airflow all the time, for a total of 100%. There are no energy savings there.

With a zoned system as shown, either a multizone thermostat or thermostats for each zone could be set so that some areas get a disproportionate amount of the heating or cooling airflow while reducing the total capacity. For example, the upstairs could get 20% of system capacity. The kitchen/family room could get 30% and the living/dining area could get 15%.

That totals 65% rather than 100%, ideal for a two-stage or variable-capacity system.

Again, an experienced HVAC system designer will be helpful. They will determine what ranges of temperature settings should be used for the various zones to ensure the system runs at lower capacity to reduce energy use but still keep occupied areas of your home comfortable.

There are two major system flaws with zoning.

Secondly, when the blower is moving 100% of air capacity, that air has to go somewhere. If one or more zones are shut, excess air will blow through those that are open.

The result will be too much heated or cooled air forced into open zones. This will cause the system to run in short but frequent cycles, which can cause temperature swings and mechanical failure. The rooms will be too hot or too cold. Finally, all that airflow will cause rushing or whistling in the ducts and might damage the ducts or cause leaks.

2. Bypass ducts and dampers should not be used. 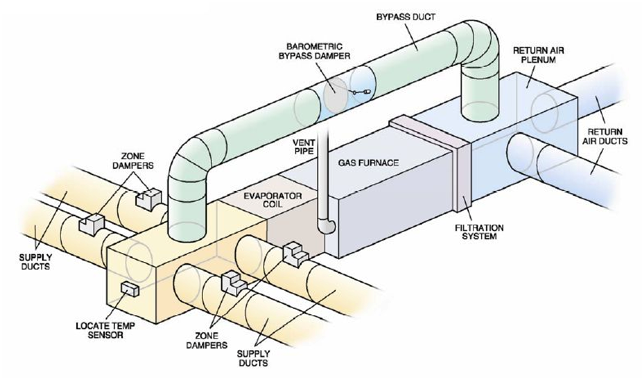 If you’re familiar with zoned systems, you might have heard of a bypass duct and damper, as shown in the image above. The bypass duct connects at one end to the trunk supplying heated or cooled air to the zoned branches.

At the other end, it connects to the return air plenum where air returns to the furnace to be reheated or re-cooled. In the middle of the duct is a damper. When all zones are open, the damper is closed, at least it should be, so no air goes through it. The damper opens partially or fully opens when one or more zones are closed and air pressure builds in the system.

A bypass must be used in a single-stage, zoned system, or there will be significant airflow and ductwork problems. The excess air being pushed by the blower one some dampers are partially or fully closed is forced right back into the return air plenum through the bypass. This eliminates the gushing of air forced through open zones.

No. Here are four reasons that bypass ducts should not be used in any system:

That’s our professional opinion, and it’s backed by leading HVAC pros. If you want to explore the issue more, this article from Energy Vanguard has excellent information.

We bring up the issue because it is hotly debated among HVAC installers. If your installer suggests building a system with a bypass, find a new installer that is opposed to them. Or at minimum, ask the installer to address the concerns we’ve raised. And definitely read the Energy Vanguard article.

Is a Zoned System Right for You?

We’re in favor of zoned systems for homes if the HVAC system is two stage or variable capacity, and the blower is variable speed.

Beyond that, they are useful when you have:

Unoccupied areas: Areas of the home are empty for long, continuous periods each day or longer.

Temperature imbalance: Some areas of your home are too warm or too cold. For example, in summer, if a lone thermostat is on the first floor of a two-story home, the first floor will be comfortable and the upstairs will be too warm. You might also want more AC flowing to the kitchen in summer when the oven is on. In winter, you might want extra heat to other parts of the home if the thermostat is located near a fireplace with a roaring fire. Zoning allows targeted heating and cooling and less total use.

Installing zoning equipment during the construction of a home is much easier than retrofitting, so less costly too. Here are cost breakdowns:

We don’t recommend DIY zoning because it takes experience to know what duct sizes are required for proper airflow capacity, how many zones are compatible with your HVAC system and what types of dampers will best meet your needs.

A simple two-zone design is effective for many two-story homes where bedrooms are upstairs and the kitchen and living areas are downstairs.

Your options are a single HVAC system divided into two zones, as we’ve been discussing or two separate HVAC systems, one for each level of the home.

When HVAC Zoning is Best

#1 You’re building a home. One HVAC system plus zoning equipment costs less than two HVAC systems. See our main HVAC System Guide for pricing for each system type for comparison.

#2 Your current HVAC system has plenty of capacity: If your home is already built and the HVAC system makes enough warm and cool air for it, you don’t need a second system. Just add the zoning equipment.

When Two Systems are Best

#1 Your current HVAC system doesn’t have enough capacity. Does your system run most of the time, but can’t adequately cool in summer or heat in winter? The first thing to do is have an HVAC technician check for common problems. Dirty filters might be the cause, and is easy to solve. A dirty furnace or AC/heat pump coils also heat and cool inadequately. Cleaning them is another easy fix. Next, your ductwork should be inspected. If it leaks, it must be sealed for peak airflow. Some of it might be improperly sized, with too little air going to parts of your home. Those repairs cost less than a complete system.

If you don’t have those problems, a second HVAC system might be the ideal solution. We recommend creating two zones by permanently blocking ductwork to what will become the second zone. Then, install a mini-split ductless system to serve the second zone. See our Mini Split HVAC Guide for details on types, pros and cons and cost.

Even in this scenario, adding zoning to the system might work. For example, if an HVAC technician determines your current system is 30% too small (a 3-ton AC when it should be a 4-ton unit, for example, or a 60,000 BTU furnace when it should be an 80K), here’s the zoning solution: Use zone dampers to reduce total heating and cooling need by 30%. This won’t work with a single-stage system, but it is possible with staged HVAC. As we’ve said a couple times, this is where input from an HVAC pro that can inspect your specific home and system will help you make the best choice.

#2 You’re building an addition or converting garage/attic space: Your current HVAC system probably can’t make enough heat or air conditioning for the extra space. You might have ductwork installation hassles too. For additions and conversions, either a conventional split system such as a heat pump and air handler or a mini-split heat pump system will serve the purpose.

By the way, the space heater is a good way to heat one room like a garage, read our Top Space Heaters (Reviews and Buying Guide) for more info.