Did you know that your ceiling fan can be changed to move air either up or down?

Did you know that it actually makes a difference in both Summer and Winter? Many people don’t realize that their ceiling fan can actually save them money on their utility bills whatever the season. Keep reading and find out why and how you can make it happen.

How a Ceiling Fan Works

Try it for yourself! A good way to illustrate this and help to remember it is to simply hold your flat hand out in front of you with fingers pointing straight away and palm down. Now tilt your hand so the thumb side is at a slightly downward angle. Let this hand represent a fan blade. Hold your other hand out in front of you, but keep it flat, not tilted. Now pass the second hand over and across the tilted hand, following the direction of the angle. You’ll see that the second hand (representing air) had to move upward. This illustrates how air moving over a fan blade angled downward is pushed upward. The opposite is true when the fan blade (your hand) is angled upward.

So this explains how the direction of a ceiling fan rotation will determine whether it will move the air in a room upward or downward. The direction that the fan will rotate will be different depending on whether you have the fan’s directional switch up or down. We will address this a bit later – Just thought maybe you were wondering how it works.

Right now, let’s see why this makes a difference in both Summer and Winter.

Fan Direction in the Summer

During the warm months of the year you will want to set your ceiling fan so that the blades turn counter-clockwise. That means if you look up at your fan, the blades will be turning to the left, opposite the way the hands of a clock turn. If you were to stop the fan, you would see that when the fan was turning this direction, the leading edges of the blades are angled up, which will be pushing the air down. 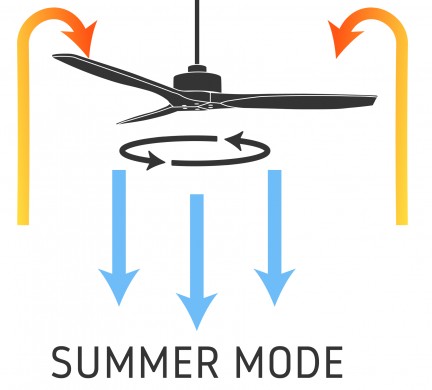 With the fan rotating in this direction, you will feel the air coming down, and it will create what engineers (and weather people) call “wind chill”. That means that the air moving across your skin will tend to evaporate the natural moisture on your skin and make you feel cooler. That’s why when it’s really hot outside, if you can find a place where there is even a little breeze, it feels cooler, even though the air temperature may be the same.

In your room, the ceiling fan doesn’t actually change the temperature of the air, it just makes it feel cooler as it passes over your skin.

How Can a Ceiling Fan Reduce AC Costs?

Assuming that your home has some form of air conditioning, the more it runs, the higher will be your utility bill. However, if your ceiling fan is creating a breeze that makes you feel cooler, you will be able to set the temperature up a few degrees and still be comfortable. Everyone is different, but according to the US Department of Energy, a properly sized ceiling fan for a room in your home should allow you to raise the A/C temperature setting 4°F with no reduction in comfort. That means you will be running your A/C less than you would if you didn’t have a ceiling fan, or if it weren’t turning the correct direction.

Pro Tip: The faster the ceiling fan runs, the greater the wind chill effect. That’s no surprise, but it is worth keeping in mind.

Most ceiling fans have at least 2, and usually 3 speeds. If you don’t mind the noise of rushing air, the highest speed will make you feel the coolest. If it’s too loud for you, try the medium speed, or even the lowest speed. Just make sure that the fan is rotating counterclockwise and the air is being pushed down.

Fan Direction in the Winter

We get asked, what direction should my ceiling fan turn in winter? 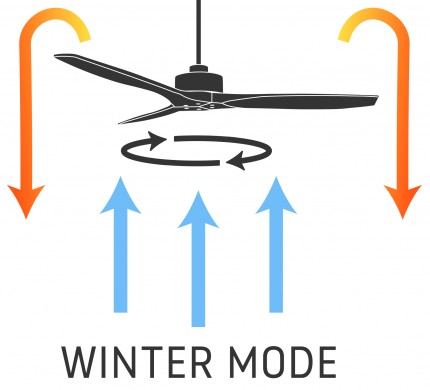 During the cool or cold weather months, depending on where you live, you probably won’t be running the air conditioning much if any. But you may be running your furnace – and in some climates, a lot! Obviously, you won’t want to be creating a wind chill effect with the ceiling fan pushing air downward. But just because it’s cold outside, don’t think that it’s time to give the ceiling fan a few months off.

By changing the direction of the ceiling fan rotation, you can make your room feel warmer, which will result in your heating unit to run less than it would otherwise. Warm air rises, and if you were to measure the air temperature at the ceiling, you would discover that it is several degrees warmer than at the level of your favorite chair.

With the ceiling fan running clockwise, it will push air upward where it hits the ceiling and then comes downward to circulate around the room.

How Can  Ceiling Save Money on Heating Bills?

Because this upward moving air isn’t blowing directly on you, it will not create the wind chill effect. Instead, it will prevent the warmest air in the room from pooling at the ceiling. The result of this is that all the air in your room will be at a more even temperature from floor to ceiling. You will feel warmer and will be able to turn the thermostat down a few degrees. Your heating system will run less than otherwise with the end result being a lower heating bill in the Winter -some experts say as much as 15% savings!

Pro Tip: You will probably want to set your ceiling fan on its lowest speed setting, since all you are trying to do is move the warm air off the ceiling, not create any wind chill effect.

Pro Tip 2: If you have very high or vaulted ceilings, using your ceiling fan in the Winter is especially beneficial. Where will the warm air from your furnace go? Up to the peak of the ceiling, several feet above where the people are. Push it gently across the ceiling and back down the walls by running your ceiling fan at low speed and rotating clockwise.

How to Change the Direction of Fan Rotation

Most ceiling fans have a manual switch on the side of the housing. It is usually a slide switch which moves up and down as the fan is mounted on the ceiling. To move the air downward in the Summer, slide the switch down. To move the air upward in the Winter, slide the switch up. That makes it pretty easy to remember, doesn’t it? Switch down – air down. Switch up – air up. On some fans, the switch moves side to side, so you’ll have to learn by trial and error – or reading the manual if all else fails – which position indicates which fan blade direction.

Pull chains: Some ceiling fans have a pull chain rather than a slide switch to change the direction of rotation. Pull the chain once and the fan turns one way. Pull it again and it will turn the other way.

Remote: If you have a ceiling fan with a remote control, you can probably change the direction of rotation with the remote. Many of them will change the direction when you press and hold the fan button until the light on the control blinks. Consult your user’s manual to find out how your remote works.

App: If you have a smart ceiling fan, you will be able to change the direction of rotation by speaking to your smart device or perhaps by your phone. Consult your user’s manual for complete instructions.

Voice: Many ceiling fans are entering the market that work with Alexa or Google Assistant.

Pro Tip: Whatever the means of changing your ceiling fan rotation, always turn it off and allow the blades to come to a stop before changing the direction. If you change directions while it is spinning, it could overload the motor and cause damage to it.

Tips to Remember About Ceiling Fans 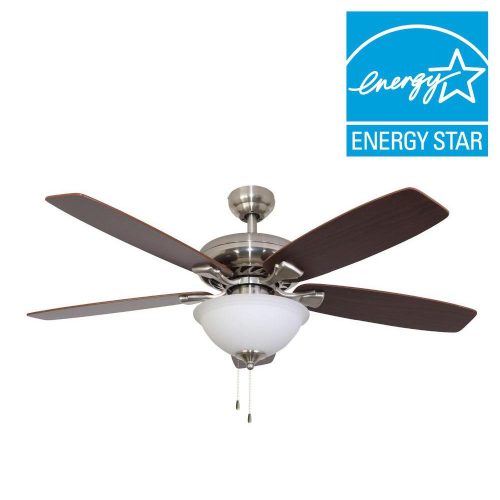 Ceiling fans are wonderful appliances. They improve the comfort of our homes, offices and other buildings by moving the air in ways that also save energy. The next time you walk into a large room – especially in the Winter - and see a fan high up on the ceiling lazily turning in a clockwise direction, you’ll know that someone understands how they work. Perhaps you can pass what you know on to someone else so they can get the maximum benefit from the ceiling fan they have in their home.

And if you want suggestions from the pick HVAC pros regarding the best ceiling fans currently available, here is our Guide to the Top Indoor and Outdoor Ceiling Fans.