It’s a common experience. The space heater “blows a fuse.”

Since most homes have updated electrical panels with circuits, not fuses, this is the same as saying the:

When the circuit breaker is tripped, the flow of electricity to outlets and fixtures on the circuit is stopped.

This is a good news, bad news situation.

The bad news is that something is wrong with

We look at all three possibilities below.

The good news is that the circuit is doing its job – protecting your electrical system from damage or possibly preventing a space heater fire.

Why Space Heaters Trip Circuits and How to Solve It

Here are the most common reasons space heaters blow fuses and how to solve the issue.

Problem: The Circuit is Overloaded

Most circuits are general-use circuits, meaning they serve two or more outlets (or fixtures).

Most homes have a few dedicated circuits – only one appliance, like the refrigerator or dishwasher is on them. The problem is though, most dedicated circuits are already in use or they are not located where you want to use the space heater.

The total number of amps being used on any circuit shouldn’t exceed the rating of the circuit. If it does, the circuit breaker will trip.

When the 1500W heater is on a 15-amp circuit, there’s little extra capacity available.

If the heater is on, and you plug another appliance into an outlet on the same circuit and turn it on, it will likely overload the circuit and cause it to shut off – exactly what it is supposed to do.

Here are the amp ratings for other common appliances:

You can see that using any of these on the same circuit with a running space heater will overload a 20-amp circuit and cause the breaker to trip.

Solution #1: Don’t use other appliances on the same circuit

Move plugs around a little to see if you can keep the heater running and still use other appliances.

See the labels: The circuits in your electric panel are probably labeled showing which areas of specific appliances they serve. The amp rating should also be printed on the circuit breaker.

Knowing the amp ratings of the circuits and the areas served will help you position your appliances and other electrical devices to optimize use without overloading a circuit.

If you have, for example, a unit with 750W and 1500W settings, try the lower setting. It might not cause the breaker to trip.

If it is enough heat to keep you warm, maybe with the help of a sweater and warm slippers, the problem is solved. The added bonus is that you’ve reduced energy use and cost.

Problem: The Circuit is Overheating

The wiring on space heaters and other appliances can get hot. This is usually an indication that the heater is drawing more electricity than it should. That’s not a fixable issue. You can try moving the space heater to other circuits. If it trips a circuit that doesn’t have other electrical load on it at the time, then that’s another clue the problem is with the heater.

Solution: Throw away the space heater

The last thing you want is an overheat situation that causes a fire. If you have an outlet that looks like the image below, get rid of the appliance that made that happen. 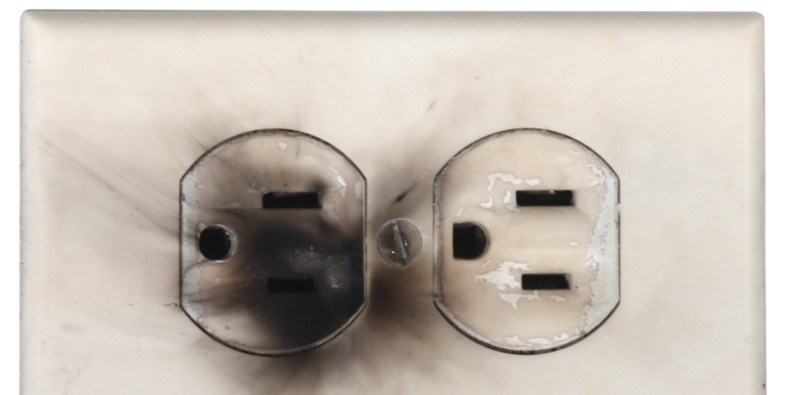 If you’re not sure, then call an electrician to check the outlet and the circuit to make sure that there isn’t something wrong with your home’s wiring.

Problem: The Space Heater Shuts Off Wherever you Put It

This is a sure sign that the space heater is faulty.

Solution: Throw out the heater

This is an easy one. It’s time for a new heater.

Problem: The Heater is on an Extension Cord

The Consumer Product Safety Commission (CPSC) is not enthusiastic about the use of extension cords.

It says, “CPSC estimates that about 3,300 residential fires originate in extension cords each year, killing 50 people and injuring about 270 others. The most frequent causes of such fires are short circuits, overloading, damage, and/or misuse of extension cords.”

Besides, extension cords are a trip-and-fall hazard. The CPSC states that about 2,000 people in the US are injured each year from tripping over an extension cord.

Solution: Avoid the use of extension cords whenever possible

Find a way to plug in the space heater closer to where you want to use it.

This advice goes for power strips too. Electricians warn that using them makes it very easy to overload circuit. Power strips are best used as surge protectors with just one or two devices or appliances on them.

How to Fix Tripped Circuit Breaker from Space Heater

Here’s a 2-minute video many homeowners will find useful.

The gentleman shows us what an electrical panel looks like, how to tell if a breaker is tripped, and how to reset it.

He mentions that the circuits are labeled. If you look closely, you can also see the amp ratings on the switch of each circuit breaker.