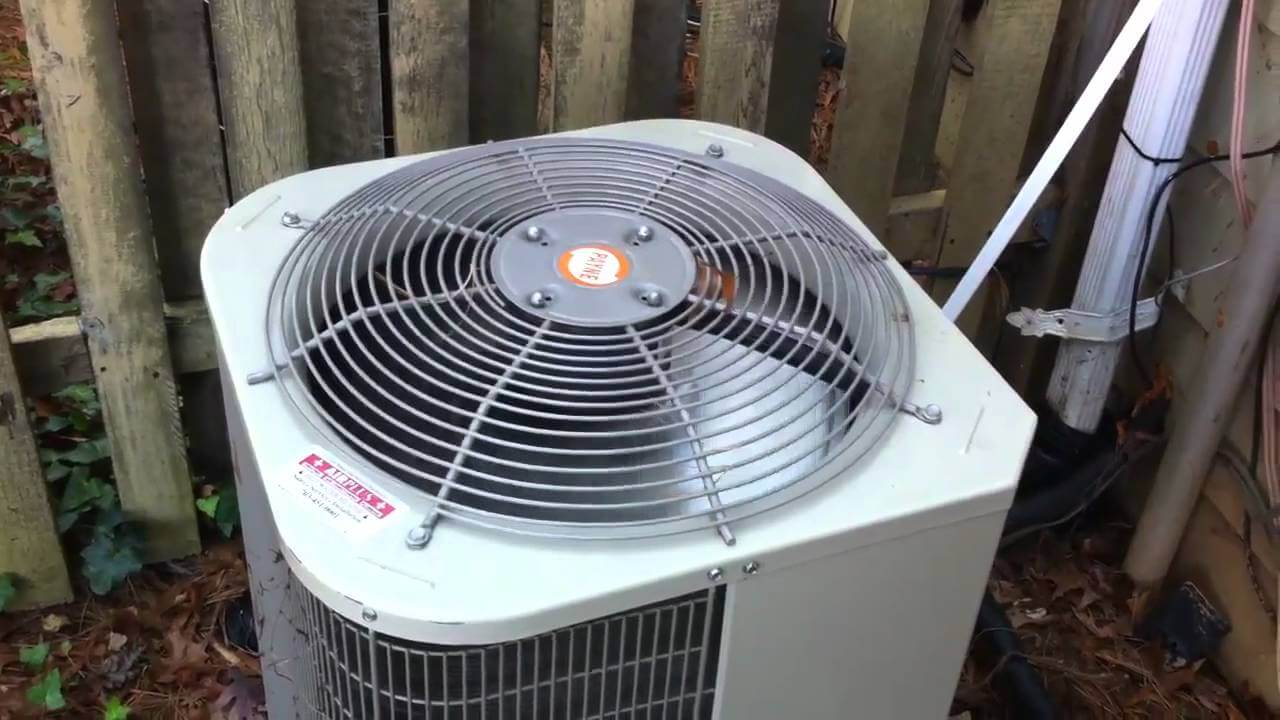 There are three common scenarios:

Heat pump yes, Fan no: The heat pump is running, but the fan isn’t.

Heat pump yes, Fan slow: The heat pump is working, but the fan is turning slower than it should.

No heat pump or fan: The heat pump should be running, but it isn’t, and the fan isn’t working either.

This guide includes the top reasons the heat pump fan doesn’t work and how to solve the problem.

If the compressor is running but the fan is not, the cause is either a bad fan motor or a burned out capacitor.

But first, check for debris!

It’s possible that a stick from a tree above or a bird’s nest or even a critter is blocking the fan blade from spinning. It happens. First, turn off power to the unit. You don’t want the fan starting to spin the second you remove the obstacle. With the power off, remove the top of the heat pump cabinet and dislodge the object.

That might solve the issue. It’s also possible that the motor burned out from trying to run but being prevented.

If the capacitor is OK, the fan might be sticking. It could be possible to get the fan going in the short-term.

Use a stick, like a paint stirrer, and give one of the fan blades a push. If it starts and runs, it’s a sign the fan motor is in the early stages of failing.

Stick-yes. Your finger – NO! Use a stick. That fan motor can kick on quickly and do some damage. Better to a stir stick than to you.

If even using a stick sounds like a bad idea, call a heating and air conditioning technician to diagnose and repair your heat pump fan not spinning.

Getting a sticking motor to spin won’t solve the issue. It is going bad and needs to be replaced. This is a $250-$475 repair.

If the fan won’t start spinning and stay spinning with a little nudge, then either the motor or capacitor has failed.

Caution: Do not run a heat pump or air conditioner without the fan working. One purpose of the fan is to cool the compressor. With the heat pump fan not working, the compressor can overheat and be damaged – and that will increase your repair bill by $1,250 to $2,000 plus.

If that happens, your heat pump might be “totaled.”

Capacitors cost $150-$275 to replace. That’s less than a fan motor costs. The good news is that capacitors fail more often than motors.

If you’re comfortable working around electricity and have a tester, you can check the capacitor. This video shows how it’s done.

The Compressor is Running, Fan is Slow

This is usually just another version of the story above. Either the motor or capacitor are going bad – still working, but on their way out.

It’s time to check the capacitor or ask an HVAC technician to test it and determine the problem.

Does you fan have two or more speeds?

Two-stage and variable-capacity heat pumps have fans that run and slower and higher speeds.

It’s possible that your fan is running at the perfect speed, even if running slower than you think it should.

Variable-speed fans run anywhere from 40% to 100% of capacity.

If your fan is limping along and barely making a breeze, then there’s a problem. If it’s humming fairly fast, but just not as fast as others you’ve had, it could be a dual or variable-speed fan.

If you have any doubts, it makes sense to call an HVAC tech to check it out.

No Heat Pump or Fan

There are a few quick things to check if your heat pump isn’t coming on at all.

Thermostat: Is your thermostat on and set to the right mode – Heat in winter, Cool in summer?

Breakers: Are the circuits to the heat pump and air handler in the ‘on’ position? If not, turn them on. If they are somewhere in the middle, it means they’ve been tripped. Turn the tripped breaker off and back on. Try the heat pump. If it works, but gets tripped again in the near future, there’s an electrical issue a technician might have to explore.

If those don’t solve your issue, the most common problems are:

Best-case scenario: The compressor contactor is bad. If you have a tester, this video shows you how to check it.

The repair is less than $300 in most cases when a professional does it.

Worst-case scenario: The compressor is bad. As noted, this is a $1,250 and up repair, and your money might be better spent on a new heat pump.

Is your Heat Pump Getting Old

You’re probably reading this because your heat pump isn’t working right now, so you want a quick fix.

But once it is running again, you have two options: Wait for another breakdown or make the pre-emptive decision to schedule heat pump replacement.

There’s not an answer that covers all situations. But here are a couple of tips.

Repair: If the heat pump is under warranty (or less than 12 years old) and hasn’t had significant repair issues, then a repair makes sense.

Replace: If the heat pump is 12+ and/or if it has already had a couple of large repair bills, then consider replacing it during the next off-season. Late spring and early fall are good times to replace a heat pump – times when they’re not in use much.

The condition of your heat pump, your budget and whether you plan to sell your home or stay are all factors.

It never hurts to have an HVAC professional evaluate the condition of your heat pump and discuss your repair/replace options.

Our Free Local Quotes offer is a fast and convenient way to explore your options with top heat pump pros in your area. The contractors are prescreened, licensed and insured. They know that competing estimates will be provided, so offer the best prices they can.

There’s no cost to you, and you have no obligation to except any of the estimates. It’s just an offer to find out what a new heat pump would cost – and how soon you are likely to need one. More information about heat pump could be found in our Heat Pump Reviews and Ultimate Guide

Related Article: Heat Pump Not Defrosting? Here’s What You Should Do.