Homeowners in the United States have become well acquainted with Honeywell heaters and air conditioning units. They are one of the more prolific manufacturers of heating and air equipment and have around 20 heaters for sale at any given time. In this Honeywell heater review, we are going to take a closer look at their range of ceramic and forced air heaters.

The Heat Bud electric heater is portable enough to take on the go, and at 250 watts, it’s just powerful enough to heat a small space. While you won’t find a thermostat or timer on the Honeywell Heat Bud HCE100, it does have overheating and tip-over protection. 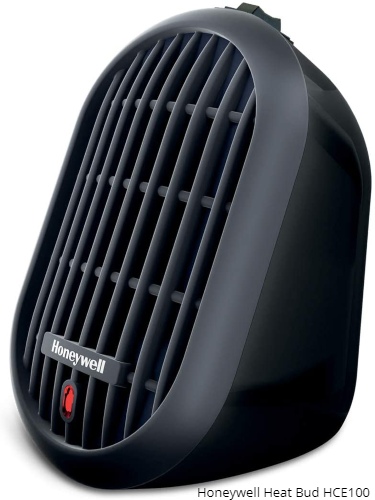 If you don’t like the style of the HCE100 but still want something small, the Honeywell UberHeat may be a better option. It’s just a little larger but considerably more stylish, whether you prefer heaters with a modern or retro vibe. You can adjust the thermostat on the UberHeat HCE200 through a dial, and it’s rated at 1500 watts.

When it comes to size, from the company in the personal class would be the Honeywell Digital Compact Tower Heater HCE311V. This heater lives up to its namesake as it's only 12” tall so that it won’t take up much space on a desktop or table. It has plenty of power with a rating of 1500 watts and a variety of features like a programmable thermostat and a dust filter.

The first full-sized tower heater from the company is the Honeywell Slim Tower Heater HCE317B. This budget-friendly system can heat rooms up to 400 square feet and has a timer, digital controls, and a programmable thermostat. It’s a great value for the price, although the same could be said for the Honeywell HCE322V as well.

Honeywell gave the same set of features to this heater, as you’ll find on the HCE317B, but the design is more in-line with their compact tower heater. , but it essentially has the same set of features. Alternatively, the Honeywell HCE323V Tower Heater is a variant of those units, but with a new feature in the form of a motion sensor for additional safety.

As for the Honeywell HCE640B and HCE645W, it’s not currently listed on the company’s official site, but for sale on Amazon and a few other retailers. It’s also in the tower heater class, but the design has been tweaked compared to the previous models. The biggest change with this heater is the fact it has four settings instead of two and is one of their newer ComfortTemp models.

The Honeywell HZ-435 and HZ-445R are more compact than the company’s tower heaters, although the power rating is the same at 1500 watts. Both of these units have two settings with programmable thermostats, timers and are Honeywell 360 surround heaters. This feature provides heat from all around the unit, and there is a 180-degree heating feature as well.

The difference between these units is visible upon closer inspection as they have different digital control panels. The Honeywell HZ-445R heater also comes with a remote control, even if both systems have similar price points. While both of these compact heaters are smart, they aren’t quite as efficient as their Heat Genius and ThermaWave systems. 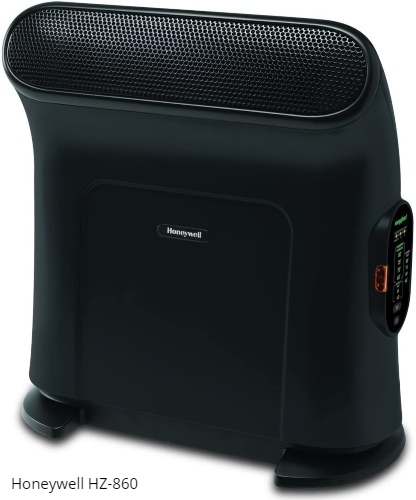 Honeywell’s engineers designed the HZ-860 with efficiency in mind. The unique ThermaWave design maximizes the heat output from this system, while EnergySmart technology automatically regulates energy consumption. The Honeywell ThermWave HZ-860 is innovative but not nearly as smart as the HCE840B ceramic heater.

This heater carries the “Heat Genius” moniker, and while it doesn’t have Wi-Fi- or Bluetooth, it has six heat settings. That includes one that will keep your feet toasty in the wintertime, and it has an adjustable digital thermostat as well. Both systems have a standard array of safety features like a 360-degree tip-over switch, but the Honeywell HCE840B has the company’s new HeatPhase timer as well.

There aren’t as many fan-forced heaters in Honeywell’s lineup when compared to their large collection of ceramic heaters. There are some interesting options, however, including several models in the Honeywell 360 surround heater class. 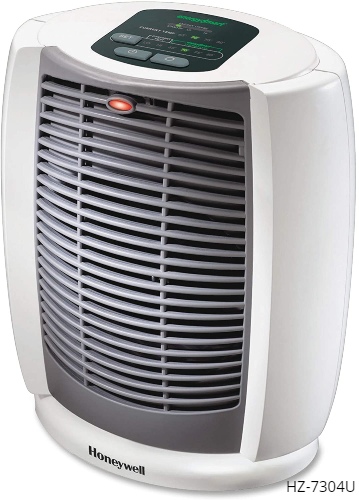 The Honeywell HZ-7300 is the first system we want to touch on. It provides even heating for rooms up to 1,000 square feet and is simple to use with digital controls and a manual thermostat. The Honeywell HZ-7304U is the white variant of this heater, and both are highly efficient thanks to Honeywell’s EnergySmart technology. 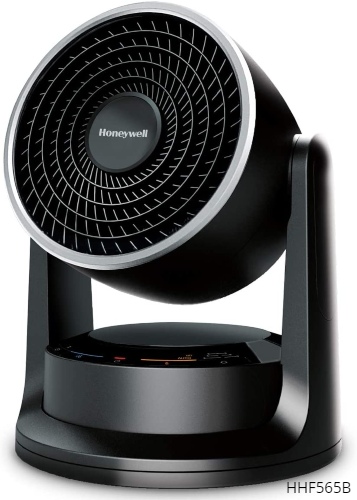 The popular Honeywell Two Position Fan Heater HHF175W has been discontinued by the company but is still sold on a half-dozen sites online. This 1500-watt heater is in the personal class and can be used standing upright or lying on its side. The Honeywell TurboForce HHF565B is another system that isn’t listed on their official site but available through Best Buy, Amazon, and other sites. It’s rated for smaller areas but has a built-in timer and a variant with manual controls.

There are currently three heaters in the Honeywell Infrared or radiant heater collection. With that in mind, one is a variant with a different color, and the other is an older radiator heater. Both systems use EnergySmart technology for efficiency, but that’s where the similarities end.

If you’re looking for a heavy-duty heater, look no further than the Honeywell HZ-789. This radiator-based system has digital controls with a programmable thermostat and a heavy-gauge steel body that’s been machine welded. It also has a 12-hour timer to go along with an energy-use indicator. It’s the largest heater from Honeywell, while the HZ-970 is at the opposite end of the spectrum.

Honeywell has one infrared heater with the Honeywell HZ-970, a relatively small heater that uses convection technology to keep a warm room. It’s rated at 1500 watts like all Honeywell heaters, with two standard settings and a digital thermostat. Other perks include a remote control, a 4-hour shut-off timer, and a permanent filter.

Like many companies, Honeywell doesn’t currently have any connected systems in their lineup, although several do come with remote controls for ease of use. They also don’t have any true dual-purpose systems like Dyson that can clean the air or cool it, but the lack of these features keeps the company’s lineup affordable.

The biggest feature from the Honeywell is their EnergySmart systems with their energy-use indicators and efficient designs. The HeatPhase timer is a nice touch as well, but only available on one unit, whereas there are a handful of EnergySmart systems in their catalog. Oscillation is somewhat rare, while around half of their heaters have digital thermostats.

There are several standard safety features to note from Honeywell, including overheating sensors and heaters with a cool-touch body. 360-degree tip-over protection is standard, and several models were listed with reinforced connections and multiple levels of overheat safety protection.

You will get a 3-year warranty on any of the heaters on our list, and the same holds true for older models from the company. That’s better than average for these types of heaters, and we like the fact they keep things uniform regardless of price or style. The company has always had a solid reputation when it comes to customer service, and given the brand, you can find some replacement parts for Honeywell heaters as well.

Now that you have a good idea of what to expect from Honeywell’s heater collection, we are going to make a few recommendations. Based on our research, the models below are the best Honeywell heaters currently available on the market. 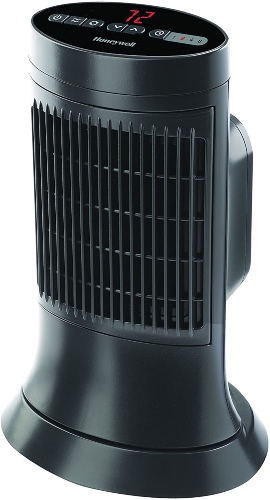 Personal heaters are a dime a dozen, so it’s not uncommon to see manufacturers with a dozen smaller heaters in their lineups. While Honeywell has several as well, our top portable pick from the company is the HCE311V Compact Tower Heater.

This little heater is the perfect size for a desktop at around 12” tall. It also has a variety of features built-in that make it a joy to use. The digital thermostat on top allows you to adjust the temperature to your liking while the oscillation feature ensures widespread coverage throughout a small room. It has an attractive, modern design as well with a recessed handle on the top that lets you take it on the go.

Honeywell included all the standard safety features on this system, and the wide base prevents tip-overs. Other features of interest include their EnergySmart technology, a permanent dust filter, an 8-hour timer, and two heat modes with max heat or eco mode. 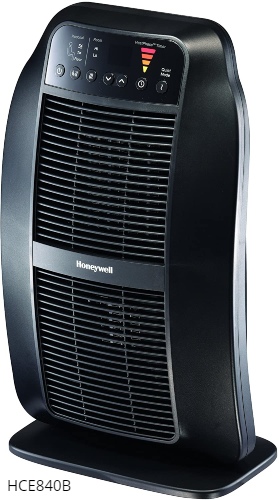 Honeywell is no stranger to manufacturing energy-efficient devices, whether it’s an HVAC unit or a residential heater geared towards living spaces. The lone entry from their Heat Genius line is also one of their better heaters for small to medium to large areas.

The company stuck with a more traditional design for this heater, although it’s modern with a curve profile. While the design did initially catch our eye, the features are what attracted us to the Heat Genius HCE840B. The aforementioned HeatPhase timer is one of them, and the addition of Quiet Mode is ideal if you plan on using the heater while you slumber.

Those features help set this heater apart, but so do the personal heat settings. You can set this heater to provide floor-level heat along with top-level heat, which is ideal when you’re seated. There are six settings in all on the HCE840B, and it has an easy to use digital thermostat as well.

The Best Honeywell Heater for Homes with Children or Pets

If you like what Honeywell brought to the table with their miniature digital tower fan, you’ll definitely be impressed by the HCE323V. While the design may make you do a double-take, this system has unique features that make it one of the safest heaters around.

If our experience, the main fear homeowners have with heaters, are problems from the heater being tipped over. Honeywell has switches that will take care of that, but this heater is designed to handle problems before they occur. Thanks to a built-in motion detector, the heater will automatically shut itself off when something gets within 6” of the sensor.

In addition to motion detection, this heart had a dual-motor system, 2x overheat shut-off protection, a programmable thermostat, and a timer. It can also oscillate just like the smaller version and comes with a handy remote control.