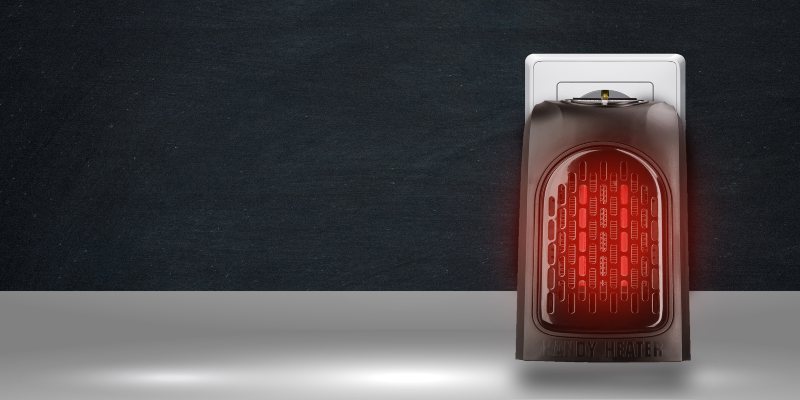 If you have turned on a television in the past 20 years, you have seen commercials for a variety of amazing products that seem too good to be true. They fall into the “As Seen on TV” niche, an area so popular that there are stores dedicated to these types of products.

That brings us to the Handy Heater, a simple system that plugs into a wall. In our Handy Heater review, we’re going to break this product down while answering the most important question of all… Does it really work?

Whenever you purchase a new gadget, unboxing it for the first time can be quite exciting. While I knew this small plug in heater didn’t have any accessories in the box, I was still interested to see how the Ontel Handy Heater looked and felt in person.

The Handy Heater arrived relatively well packed with a simple instruction manual. Given the price, you may expect the heater to “feel” cheap, but that isn’t the case at all. It’s actually heavier than I thought and seems to be well-built. Nothing rattled inside the heater when I shook it (which is always a good sign), and the LED display is covered with a protective plastic film to keep it scratch-free.

Unfortunately, that film didn’t do the trick as my test unit has a deep scratch through the middle of the display. It doesn’t affect how the heater performs or your visibility, but it was disappointing despite the budget-friendly price tag on the Handy Heater. 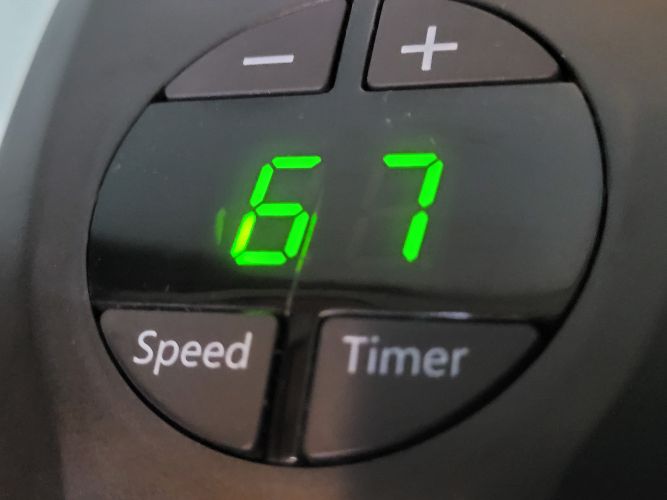 Before we talk about how the Handy Heater performs, we want to discuss the specifications and the overall design of this electric heater. While style is a matter of taste and personal preference, the Handy Heater HEAT-MC12/4 isn’t a bad looking unit by any means. 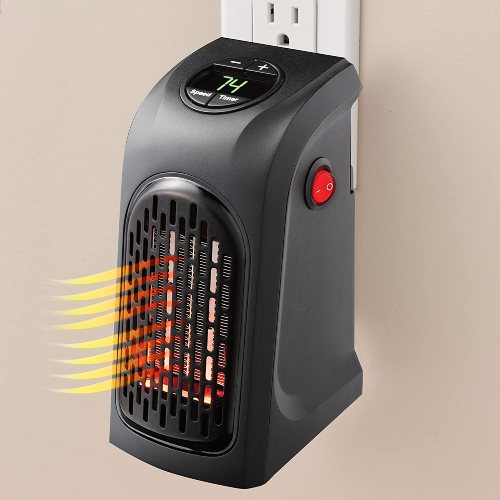 It has rounded edges with a metal grate across the front, which protects the heating element. The company’s logo is emblazoned across the bottom of the heater while a small display and four buttons sit above the grill. Those buttons allow you to adjust the speed and temperature of the Handy Heater or set the built-in timer.

To turn the unit on, you need to flip a toggle switch on the side. It’s firm and not easy to click by accident, which is a bonus in our book. A small fan is on the bottom of the heater, and a 3-prong plug is located on the back. That power plug swivels upside down and can lock into position. There are also two small rubber bumpers on the back that keep the heater from sitting completely flush against the wall. 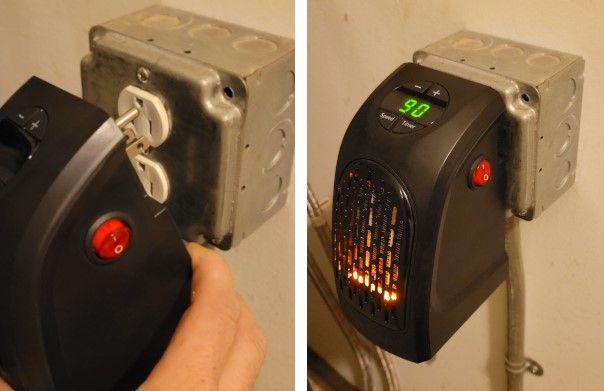 Overall, it’s an efficient design that’s similar to other companies that produce small portable plug in heaters. It has a completely different vibe than heaters like the Minetom 350, however, and is only available in Black.

Amazon and other shopping sites list the Handy Heater at 7.79”H x 4.5”W x 5.71”D, but those measurements are inaccurate. The heater is actually smaller than that, which is a good thing if you appreciate portability. After pulling out a tape measure, I found this system to measure 6.1”H x 3.5”W and 3.75” deep at its widest point.

The weight came out at 1.27 pounds, which is much heavier than your standard nightlight or even an outdated smart outlet. Overall, the size and weight of the heater can make it a little awkward with some outlets, but I had no issues plugging it in or having it stay put once I found a suitable power outlet in our home.

There aren’t many features with small or cheap heaters, but the minds behind the Handy Heater surprised us with their system. It’s rated at 350 watts and has two speeds with High and Low. According to the company, that’s enough power to heat up a room 250 square feet in size. While we couldn’t verify that number, it did make a difference in our 300+ square foot kitchen.

There are no other tech specs to note on the Handy Heater, but there is a fully adjustable thermostat. It has a range between 63°F to 90°F and is simple to use thanks to electronic controls. This small plug in heater also comes with a timer that you can set for up to 12 hours.

That’s another perk, although you can only set the timer in 1-hour increments. The only real safety feature on this heater is the most important one – overheat protection. If the heater begins to become too hot when plugged into a wall, a circuit inside will automatically shut it down for safety.

Hands-on with the Handy Heater

The first and only issue I had with the Handy Heater after it was unboxed was finding a power outlet suitable for the system. While the rotating plug did help to a degree, I could not use the Handy Heater in a few areas of our home because of the layout. 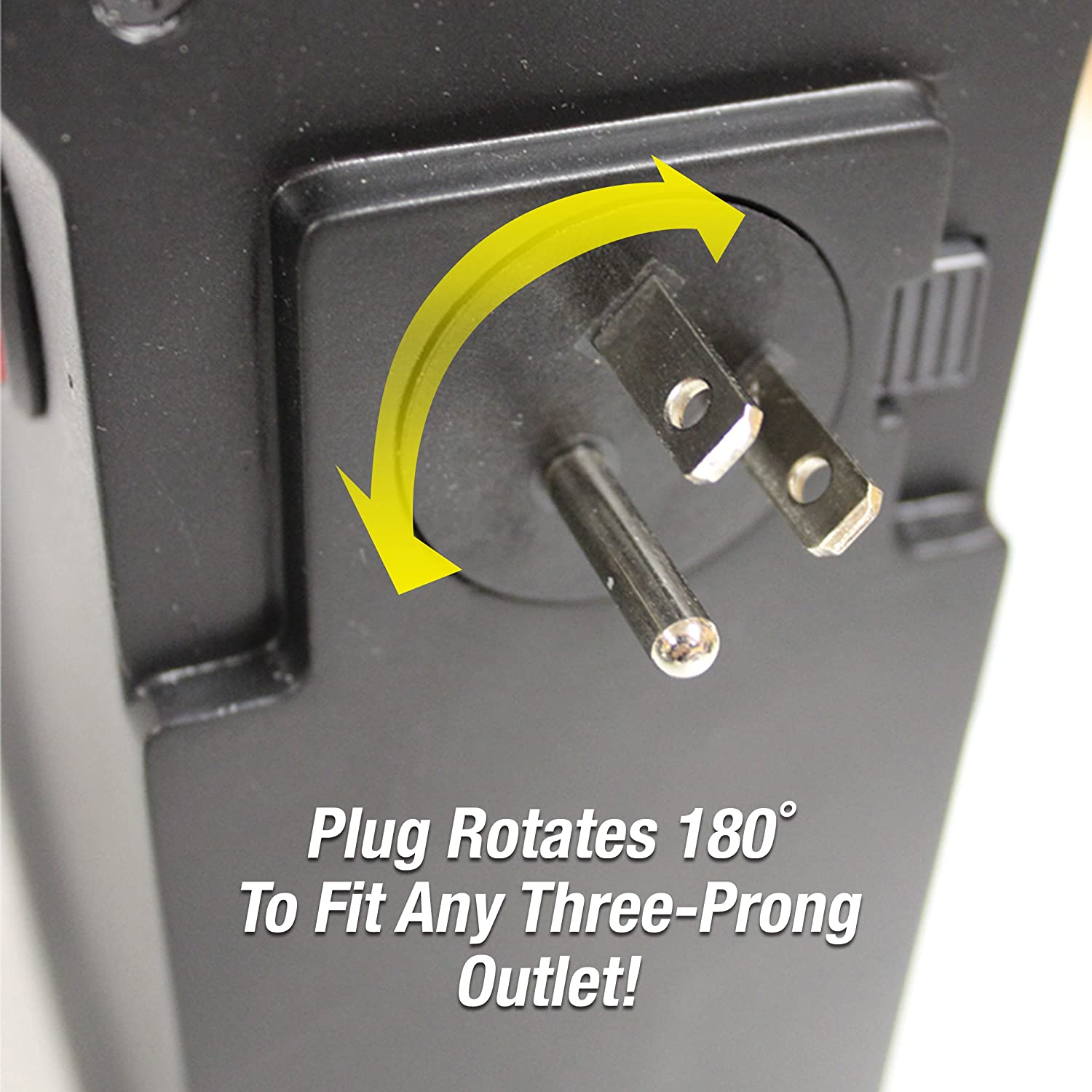 As you can see, this heater is made to be used against a flat wall surface, so any plugs near trim won’t work. That’s a very minor issue and something that may not affect you at all, but worth mentioning nonetheless. You will definitely want to consider placement with this heater due to its design. 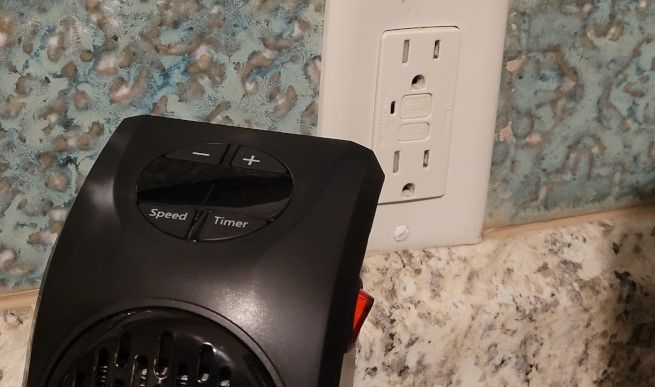 Once plugged in, you just need to flip the switch on the side of the system to fire up the Handy Heater. It’s set at 90°F automatically each time you plug it in, and if you want it to run continuously, you simply need to adjust the thermostat and leave the timer alone.

Otherwise, you can use the buttons on the front of the handy heater to set the 12-hour timer. The small display is easy to read, and while I didn’t test the temperature, it puts out a lot of heat quickly. It’s far from the quietest plug-in heater, however, and it put out a fairly strong electrical smell during my initial tests.

That’s not uncommon for this type of device, and it did fade as the system ran longer and was broken in. The odor was still noticeable after a half-dozen uses but not troublesome enough to warrant any real concern or send you running from the room.

All the functions I tested performed as expected, and I let the heater run for a solid 3 hours based on the timer. Would I let it run longer than that? I’m not sure, as that’s a lot of faith to put in such a small heater, especially one that gets as hot as the Handy Heater. Despite its name, you will want to keep your hands far away from this system.

To say the grill is hot to the touch would be a bit of an understatement. I scorched my fingers fairly quickly after less than 30 seconds of use and didn’t attempt to put my hands near the grill after several hours. The body was cool enough to handle easily, but it’s not a heater we would consider safe to use around pets or children.

As Seen on TV products are a mixed bag, as millions of American’s find out each year. Sometimes the product exceeds the hype, while other times, it goes straight into the trash bin. After looking into hundreds of Handy Heater and Zen Heater reviews, it appears most consumers are pleased with this small electric heater.

We didn’t notice many complaints regarding power aside from homeowners who weren’t sure what to expect from a 350-watt heater. People loved the price on the Handy Heater as well and found it useful for small areas like home offices. The most common complaint were issues related to quality control. We noticed a variety of issues that appeared to come down to faulty units straight out the box.

If you’re wondering if the Handy Heater is really handy… the answer is yes. I was impressed by what it was able to for its size; even if it’s not a heater I would leave unattended for very long. I wasn’t surprised that the front of the unit got hot, but it’s not something we could use in our home because of pets and nose-level power outlets.

Consumers interested in a cheap heater that doesn’t perform like one will want to give the Handy Heater a look. You can beat what it brings to the table for the price, and an interesting alternative to small floor standing heaters. Just remember to pick this heater up from an official source as there are several knock-off versions of this heater that aren’t produced by Ontel.

Q: Does the Handy Heater come with a warranty?

A: At best, you may get a 30-day guarantee with this system, but we could not find any information in regards to an official warranty.

Q: Is the Handy Heater the same as the Zen Heater?

A: While we can’t say that it is the exact same heater with 100% certainty, it seems to be. There are a number of Zen heater reviews online that show the same heater and have similar reviews as well.

Q: How much space do I need around the bottom and in front of the heater?

A: The company recommends keeping a distance of at least 3’ around the heater while it’s in use.

Q: Can I use the Handy Heater in a bathroom or with a GFCI outlet?

A: No. It’s not rated for use in damp areas or any location where a GFCI plug is common.

Q: Why won’t my heater turn on?

A: If the heater has been in use, the overheat protection circuit could have kicked in and shut off the heater. When this happens, you need to power it off and unplug it from the wall for at least 10 minutes before trying it again.