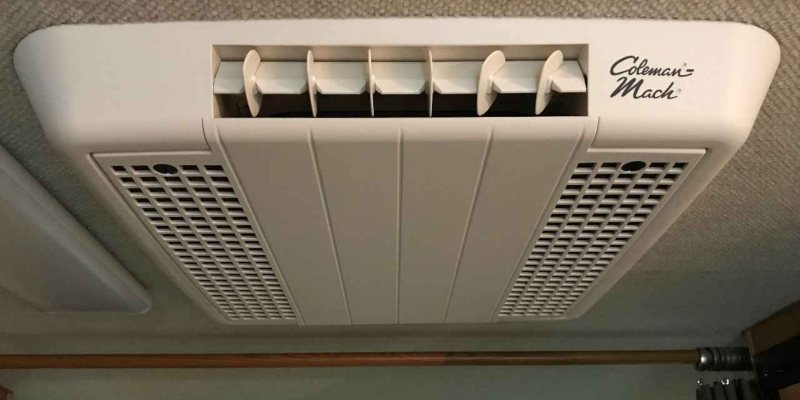 When you need a great air conditioner for your RV or fifth-wheel trailer, Coleman-Mach is one of a handful of brands consumers turn to. They have a long history of producing affordable rooftop units and have stayed atop of the industry over the years through innovation and acquisitions alike. In our Coleman RV air conditioner review, we are going to break down the brand’s current collection.

When you want the widest selection from Coleman-Mach, their Signature Series line of air conditioners is where you’ll want to start your search. Systems from this class are made from the highest quality components and engineered for reliable cooling performance year after year.

At this time, the Signature Series consists of 11 air conditioners, four of which have heat pumps. The smallest system is the MACH 8 Plus CUB with a rating of 9,200 BTU and an ultra-low profile. On the opposite end of the spectrum is the MACH 15 at 15,000 BTU. It has a higher profile than the CUB but is a couple of pounds lighter with a weight of 85 pounds.

Both the rooftop AC units and models with heat come in medium, low or ultra-low profiles in black or white. The capacity of these systems ranges from 13,500 to 15,000 BTU, with the MACH 8 PLUS HP considered the premium unit from this class. Outside of one model from the Roughneck series, these are the only models currently equipped with condensate pumps as well.

There’s nothing worse than having an enjoyable summer night ruined by a noisy air conditioner in your RV. While all of Coleman-Mach’s systems are designed with that in mind, their Quiet Series air conditioners take things a step further.

Air conditioners from this collection are just as efficient as ones from other series but with noise reduction built-in. All of the systems are DQ, which stands for ducted quiet, or NDQ for people looking for a non-ducted RV air conditioner. There are three different types of AC units with the MACH 15, MACH 3 Plus, and MACH 10 systems, along with a SoftStart variant in the Coleman-Mach 45203-6993.

The Roughneck lineup lives up to its namesake by providing consumers with a high-efficiency unit that can take some abuse. That’s due in part to the components inside this system, including the oversized evaporator and condenser coil, which help with heat transference. 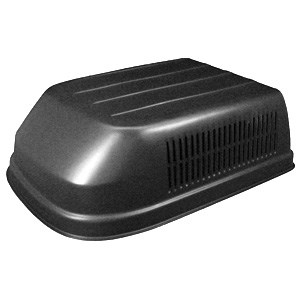 Vibrations can wreak havoc on any rooftop air conditioner, but it won’t be a problem with the Roughneck series. The heavy-duty halo mounting system has a reinforced top plate and shock-absorbing compressor mount.

At this time, there are around eight variants in this collection, but only three models with the MACH 3, MACH 8 Plus, and MACH 15. There are no systems with built-in heat pumps, although that component can be purchased separately. There are only two profiles in this series as well, with Medium or Ultra-Low.

One of the more affordable variants from this series is the MACH 3 48203-6685, which has a medium profile at 13.8” high. This unit is rated at 13,500 BTU and listed with an airflow rate of 320 CFM. A plastic drain pain will prevent corrosion, and you’ll be thankful for small but important features like stainless steel truss head screws as well.

One significant negative to running any high-powered appliance in your RV is the power draw. That includes air conditioners, especially ones that are not necessarily designed to be energy efficient. The Coleman-Mach PowerSaver series is engineered to combat that problem and make tripped breakers a thing of the past.

Designed to keep breakers from tripping, these air conditioners have high-efficiency compressors and fans and a unique blower wheel. They also have a low amp load and range from 11,000 to 15,000 BTU in size. All of these systems have a medium profile, which means they are close to 14” tall. There are no polished black and white housings in this range either – only textured shrouds.

The Coleman-Mach SoftStart air conditioners series is their smallest collection, with only two units available. Models from this line slope power to the motor, which allows for smooth startups every time instead of a sudden burst of power. Both of these systems are 13,500 BTU units with low profiles, and the only difference being one is geared towards a ducted installation while the other is not.

The company’s Specialty lineup consists of International models, the ParkPac AC unit, and a unique air conditioner that sits below your RV instead of on top of it. The Two Ton Plus air conditioner from Coleman-Mach has two compressors, a heat pump and measures 45.8”L x 20.8”W x 18”H with a weight of 200 pounds.

It can be installed below the floor of a large recreational vehicle or on the floor itself, depending on the layout. This powerful system has a low center of gravity but is definitely a niche product compared to the rest of their air conditioners. As for the International series, they are 240-volt systems from the Mach 8 Plus, Mach 3 Plus, and Roughneck collections.

The Coleman-Mach Park Pack air conditioner is another large unit rated at 13,700 BTU and designed for parked trailers. It comes complete with a built-in mounting pad and can be used with floor ducts. The oversized coils and airflow rating of 535 CFM make it a unique alternative for stationary trailers and Fifth-wheel systems alike.

While Airxcel does a great job classifying their systems into different series, there are still five types of air conditioners in the MACH lineup. In some cases, the differences are minor from one series to the next, but important to keep in mind nonetheless. 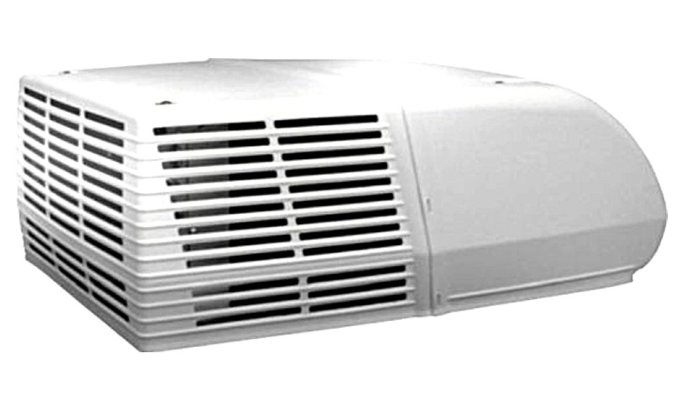 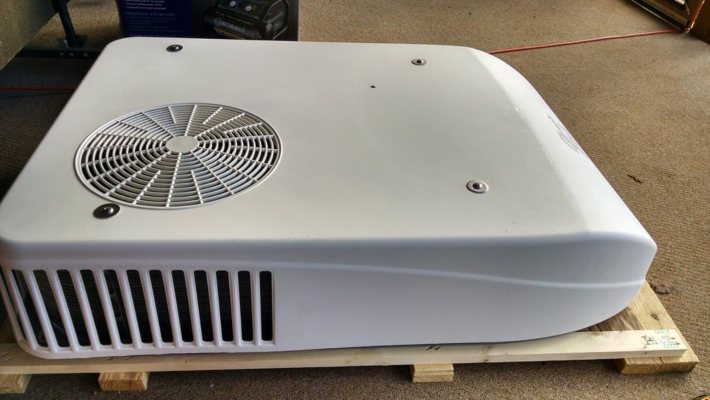 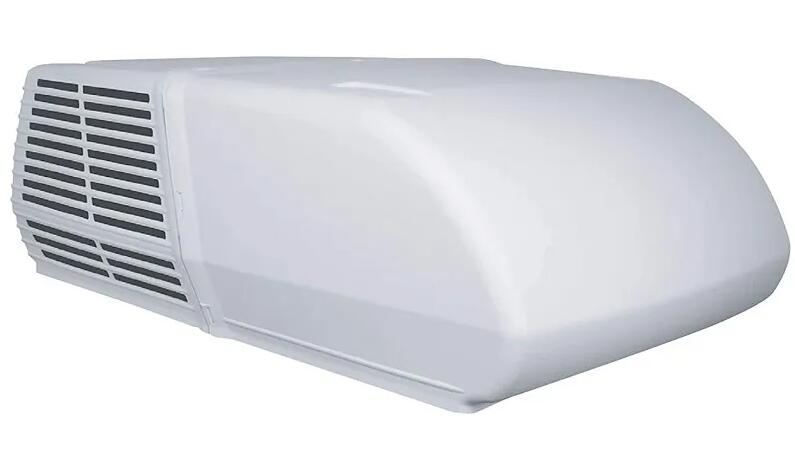 Several companies that produce air conditioners for recreational vehicles claim to have the smallest or lightest units on the market. While it’s impossible for most people to verify those claims, we can say that Coleman-Mach definitely has some of the slimmest units around.

The company’s air conditioners come in three different profiles with Medium, Low, and Ultra-Low. Any models with a polished finish are a few centimeters taller and wider than ones with a textured finish as well.

Their medium profile units are nothing to write home about at 13.8” high, but their low profile models are slim at only 11.8” tall. While they don’t have as many Ultra-Low air conditioners, units like the Cub are only 8.25” tall, which is quite impressive.

Like most RV air conditioner manufacturers, you won’t find many bells & whistles with Coleman’s stock units. They have multiple speeds, just like systems from Dometic and Furrion, but you’ll have to pay extra if you need to pick up a thermostat, control package, or conversion kit.

Coleman’s warranty process is straightforward and simple to understand. The company provides a 2-year guarantee on all air conditioners regardless of the series or system. That includes both Domestic and International models as well as their Marine units.

The company has an extended warranty plan available that adds 3 years of coverage to your new AC unit. It includes parts but not labor and excludes the shroud or a complete replacement. It’s a mixed bag in that regard, but cheap piece of mind compared to the overall cost of their rooftop air conditioning systems.

While Coleman-Mach is a leader in their field, their products aren’t the easiest to find through the normal channels. That means your best bet could be to purchase a system directly from an authorized distributor, although you can find their products online as well.

If you want selection, online shops that only deal in RV equipment is where you will have the most luck. Amazon is a close second, as we were able to find almost a dozen models. That said, many were outdated or slight variants with a different colored shroud. The MACH 15 series is one of the more popular options there, along with Mach 8 air conditioners.

The same goes for big-box retailers like Home Depot and Lowes as we have seen models available locally but not online and vice versa. As for pricing, we feel like Coleman-Mach’s units are more affordable than comparable systems from Dometic but not as cheap as companies like Furrion. At the end of the day, pricing depends on the model and where you purchase it.

There may not be much competition when it comes to rooftop air conditioners, but it’s easy to understand why Coleman-Mach is towards the top of the food chain. Even if Dometic’s systems are easier to acquire for the average consumers, Coleman has the edge in pricing and some of the more interesting options on the market with their PowerSaver and SoftStart series.