If you’ve been in the market for a powerful desktop or tower fan over the past decade, you may be familiar with Vornado’s product line. Over the years, the company has expanded its catalog with heaters and air purifiers along with a collection of humidifiers. In our Vornado humidifier review, we’re going to take a look at their current lineup of humidifiers, so you’ll know what to expect from the brand.

While Vornado doesn’t have the largest selection of humidifiers, their units have high outputs and are ideal for rooms between 500 to 1,000 square feet. They currently produce three types of systems with evaporative, ultrasonic, and steam humidifiers. 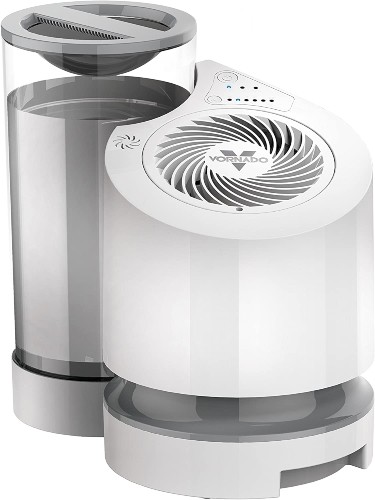 With a coverage area of 300 square feet, the Vornado EV100 is the smallest humidifier for general use. This evaporative system has a 1-gallon tank with an output rate of 1 gallon. There aren’t many features aside from an auto mode, two speeds, and the companies SimpleTank system. The tank is removable, and their system makes it easy to clean, carry, and fill. 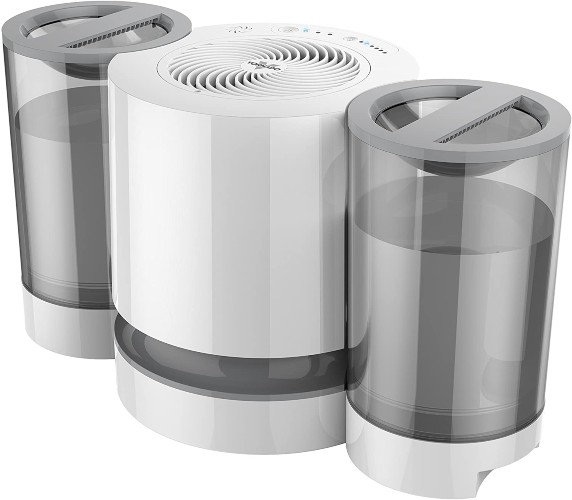 The Vornado EV200 is comparable to EV100 from a design standpoint, but with an extra water tank. It has a total capacity of 1.5 gallons with the SimpleTank system but has double the coverage at 700 square feet. It has two speeds and an output rating of 2.6 gallons per fill. Another system geared towards rooms 700 sq. ft. or smaller is the Vornado Evap3. 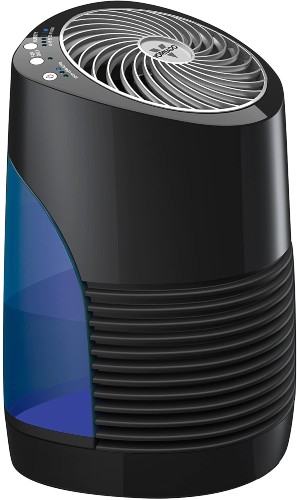 Despite its name, it has an entirely different design from the other humidifiers in the collection. While this humidifier only has one tank, it’s listed at 1.5 gallons and also has an output of 2.6 gallons. It has a stylish black exterior with a contrasting blue tank and a small digital control pod at the front. The Vornado Evap2 keeps that same style but is more compact with a 1-gallon water tank. These humidifiers don’t have the SimpleTank system but still easy to clean and fill.

The Vornado EVDC300 is an interesting take on the company’s 1-gallon evaporative humidifiers. It’s from their Energy Smart lineup, which is said to be 90% more efficient than a standard humidifier. Given the fact it has an output of 3 gallons from a 1-gallon tank, it’s hard to argue with that statistic. It’s listed for rooms up to 750 square feet and has touch-based controls with a small digital display. 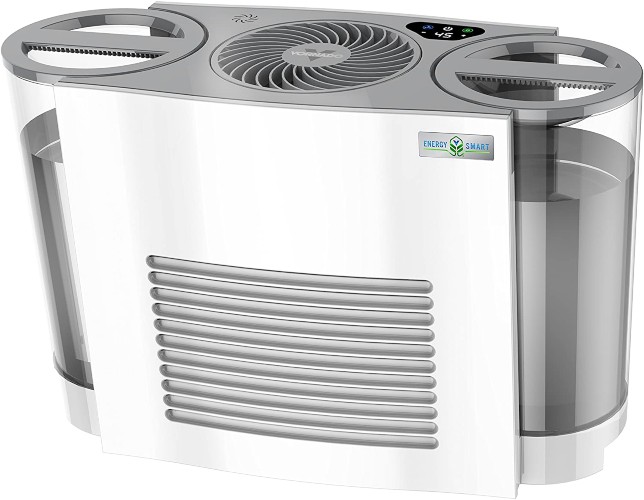 Vornado’s second energy-efficient humidifier is the Vornado EVDC500. It’s a double-sized twin of the EVDC300, with twin 1-gallon tanks and an output of 4 gallons each fill. The coverage range is slightly larger at 1,000 square feet, but everything else essentially stays the same. Both of these humidifiers have an auto-shutoff feature and a pulsating low water indicator light. They also have better warranties with a 5-year general guarantee and 10 years on the motor. 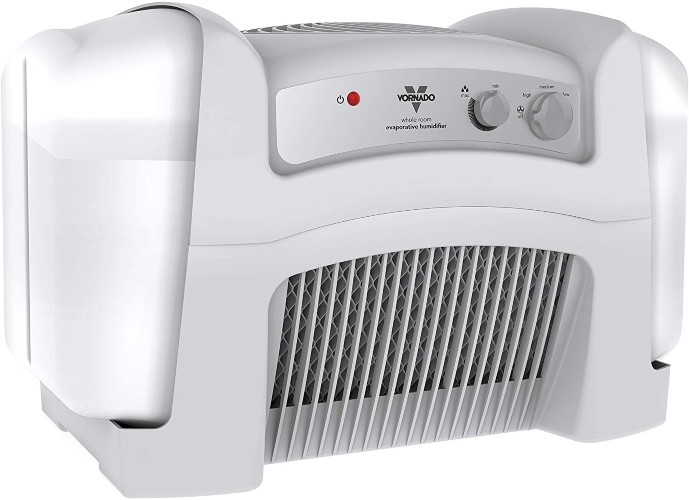 Products that are made in the USA have gained ground in recent years, and Vornado has one humidifier in its collection that’s billed as made in America. That would be the Vornado Evap40, the company’s largest evaporative humidifier with dual tanks and a capacity of 4 gallons. The output rate matches the input per fill within a 24-hour period, and it has three speeds with low, medium, and high. 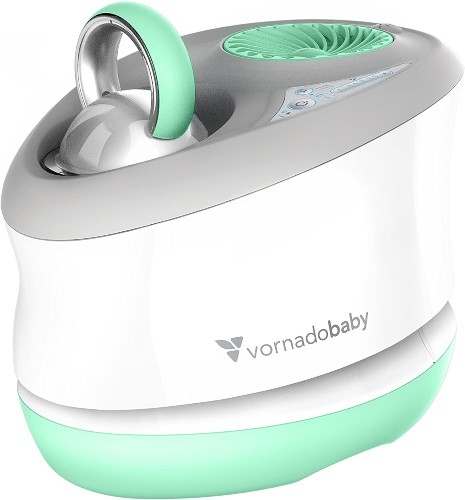 The Evap40 has a humidistat, uses two wicks, and is rated for rooms up to 1,000 square feet.  Alternatively, for nurseries and children’s bedrooms, the Vornado Huey is an interesting system. Rated for rooms up to 150 square feet, this system is designed to go with any décor and is easy to fill with a 32-ounce capacity. The Huey uses absorbent wicks, which eliminates white dust and has features like locking control and automatic shutoff for additional safety. 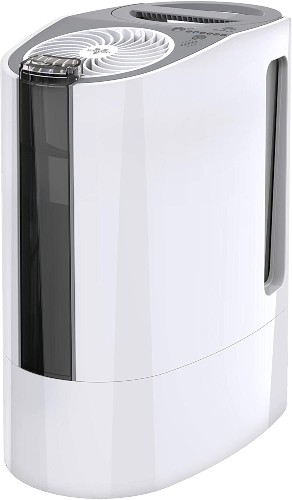 With ultrasonic humidifiers, there are two systems to choose from with the Vornado UH100 and Ultra3 Ultrasonic humidifier. Both have 1-gallon tanks with an output of 2 gallons per refill and have two speeds with high and low. Automatic mode is an option as well, thanks to a humidistat. What sets these systems apart, aside from the price, is their design. 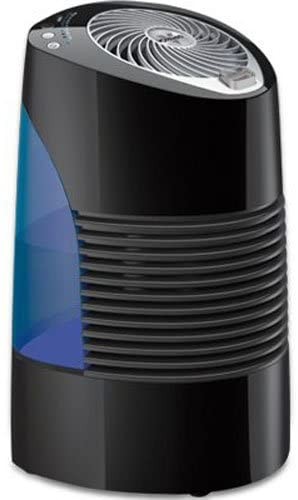 The UH100 has a design in-line with the EV100, EV200, and the EVDC series. That means there are simple top-mounted controls along with a vent and the company’s SimpleTank system. The Vornado Ultra3 is designed like the Evap series with the sleek Black and Cobalt Blue exterior and tank in the back. Both have the same warranty, so it really comes down to the tank and overall design with Vornado’s Ultrasonic systems. 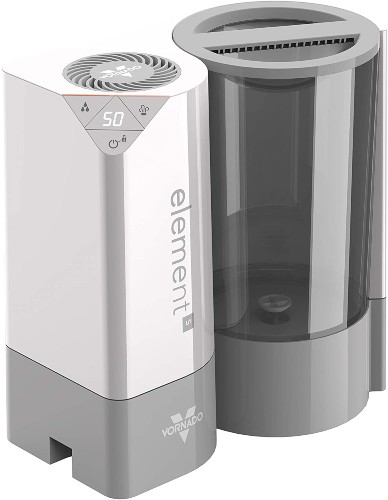 Vornado has three steam-based humidifiers, and two of those models are aromatherapy ready. The Element S doesn’t have a scent cup but is the most affordable of the three. It has a .75-gallon SimpleTank to go along with a small digital display and three steam settings. You can choose from hot, warm, or cool with this system. This humidifier is best-suited for rooms up to 1,000 square feet and has an output rating of 4 gallons per fill. 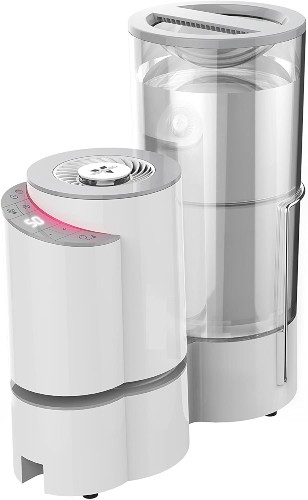 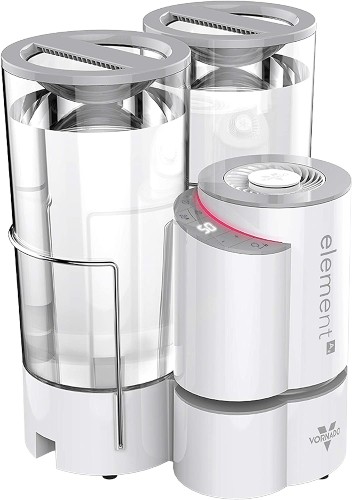 The Vornado Element A is the next step up with a slightly larger 1-gallon tank. It has the same specifications but had been completely redesigned. The vortex fan section is smaller with a control pod on the side instead of the front. There is a removable scent cup on the grill outlet as well. The Vornado Element A2 has the same design and output, but dual 1-gallon tanks. Locking controls, automatic shutoff, and dimmable lights are present on Vornado steam humidifiers as well.

Humidifiers usually don’t have a wealth of features, but Vornado is a brand that is known for packing a lot of features into their products. Well, that isn’t necessarily the case with their humidifier lineup. Their evaporative systems are a little barebones aside from the EVDC series.

The pulsating tank light is a nice touch, and more classy than other humidifiers with bright, color changing LEDs. Their SimpleTank system can be found scattered throughout their collection, and the ability to dial in the humidity digitally is an obvious perk as well. Auto shutoff is found on most of their humidifiers, and several have simple but effective touch-based control systems.

Reviews on Vornado’s humidifiers are mixed depending on which system or line you are interested in. We found that there more complaints and issues with their Evap series and the Ultra3 Ultrasonic humidifiers than with other systems. On that note, the Evap2 and Ultra3 are the two most poorly reviewed humidifiers from the company.

Issues with those models range from homeowners unhappy with the price to leaky tanks and malfunctioning units. The main thing to keep in mind with those products is the design, which changed dramatically with the Element, EVDC, and EV series. All of those humidifiers have relatively solid reviews. Overall, consumers seemed to appreciate the style of their systems and how easy they are to use, although there are complaints on pricing.

Vornado has solid warranties on their other products, and their humidifiers are no exception. Most all of their systems come with a 5-year warranty, but two have longer guarantees. The company’s energy-smart humidifiers have a 5-year general warranty, and 10 years on the motor.

With replacement parts, you won’t be able to buy them through Vornado’s website unless you need a wick, descaler package, or mineral cartridge. We didn’t have any luck finding parts for their current systems through specialty shops, and while you may be able to purchase parts directly, you’ll need contact the company beforehand.

Pros and Cons of Vornado Humidifiers

While beauty is in the eye of the beholder, we would count design as an advantage with Vornado humidifiers. They have some nice looking systems, and nothing has been over-engineered, so they are easy to use. Their warranties are a major pro as well, considering most manufacturers offer a 1-year guarantee.

Vornado humidifiers aren’t light on features, but they don’t have as many speeds or modes as other systems we’ve seen. They are powerful, however, and we like the fact that their steam humidifiers have a cool, warm, and hot setting. Cons for this brand mainly boil down to price and their overall selection of products.

Most of Vornado’s humidifiers are evaporative, so the selection is slim if you’re looking for an ultrasonic or warm mist humidifier. Many of their systems are variants as well, and there are only two humidifiers with medicine cups. Their machines are also priced at a premium compared to other brands with systems the same size.

It’s safe to say that pricing on Vornado humidifiers is on the high-end, although several steps below Dyson. The cost varies between $10 - $15 depending on where you plan to shop, but you won’t find any Vornado humidifier for under $60 unless it’s an old model or on deep discount.

Availability of the company’s products is excellent. With that latter, that includes popular locations like Home Depot, Lowes, and Target. You can also purchase a Vornado humidifier through Amazon or direct from the company as well, although we found their prices higher than other online retailers.

Q: How often should I change the wick in my Vornado evaporative humidifier?

A: The company recommends changing your wick every 4 to 8 weeks, depending on how often you operate the system and the type of water used in your humidifier.

Q: Can I use Vornado’s humidifiers as a fan?

A: While not as powerful as the company’s traditional fans, most of their humidifiers have a fan-only feature.