Out of all the air purification methods used in residential air cleaning, ionization is the most misunderstood. This technology has been around for decades but has been thrust into the spotlight in recent years as homeowners look to improve indoor air quality and combat airborne viruses. In this guide, we’re going to tell you how these machines work along with the pros and cons of Ionizer Air Purifiers.

Ions can be produced artificially through an ionizer, but they also occur through a variety of natural processes.  A positive ion, otherwise known as a cation, is formed by the loss of electrons, which gives a group of atoms a positive charge.  On the opposite side of the spectrum are negative ions, also called anions.

While you may not realize it, positive and negative ions are everywhere in the world around us. If you’ve ever stood and watched waves crash against the shore, you’ve experienced the power of negative ions. Some studies have shown that they can improve your mood, although the same can’t be said for positive ions. Despite their name, positive ions actually have a “negative” effect on your health, which is where devices like ionizers come into play.

What is an Ionizer?

Before we break down ionizers, it’s important to understand that ionization in the HVAC world typically refers to a “feature” found on air purifiers. While manufacturers use names like an ionic air purifier or air ionizer to describe their machines, all of these systems have multistage filtration, with ionization being part of the process. 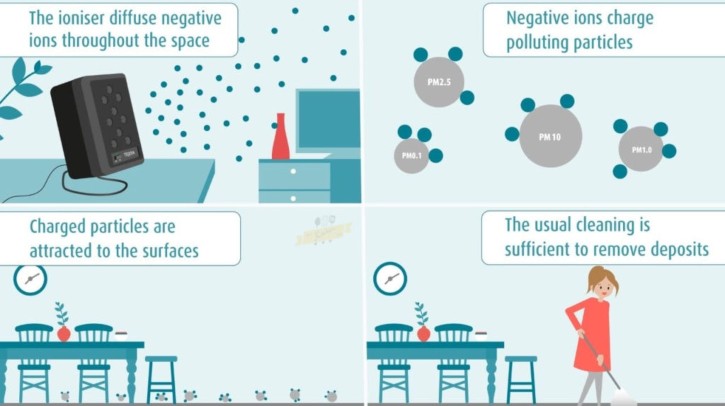 An ionizer’s sole purpose is to remove particulate matter from the air, and it accomplishes this by producing ions. Unlike positive or negative ions produced naturally, these machines use electricity to charge negatively charged ions before emitting them into the air. These charged ions are attracted to positive ions in your home.

Positive ions carry particles like dust and other particulates through the air, and when they meet negative ions, they are bonded together. Once attached, these microscopic particles become too heavy to float through the air. The dirty particles will remain on the floor, furniture, and other items in your home until they are collected, which all depends on the type of ionizer system you choose.

Both ionizers and electrostatic precipitators use ions to cleanse the air. Unfortunately, we have seen manufacturers refer to purifiers as electrostatic ionizers when these two systems are completely different.

For residential use, the most common type of electrostatic precipitator is one that uses an electrically charged filter. The Avari AV 600 and a few other systems use this technique, which captures microscopic particles. These multistage systems are highly effective in small to medium rooms.

Alternatively, a true electrostatic precipitator relies on plates and an electrostatic field. Collection plates inside these systems trap charged airborne particulates, but they can produce Ozone and nitrogen oxide indoors, which essentially pollutes the air.

The Pros and Cons of Ionizers

Now that you understand what an ionizer is and what it can do, it’s time to take a look at the pros and cons. While every air purification method has its quirks, you might be surprised by some of the facts behind air purifier ionizers.

One major advantage of an ionizer over other types of air purification methods is ease of use. Do you like appliances you can set and forget? If so, you’ll appreciate any system with an ionizer feature. You simply need to turn it on, as there are no filters to replace. Cleaning the plates on some systems is the extent of maintenance on these machines.

Never having to replace filters will keep the costs down, which means ionizers are more cost-effective than traditional air purifiers overall. They are ideal when you want to clear smoke or odors from a room compared to HEPA filters or UVC systems. Fanless ionizers are incredibly quiet, but models with fans typically have a lower decibel range than an air purifier.

While an ionizer will certainly freshen the air in any room, they aren’t without their drawbacks. These systems have a limited range, so you won’t find a CADR rating unless it’s a multistage ionizer. By design, they can’t effectively deal with things like pet dander or dust, so they aren’t the best option if you suffer from allergies.

Ionizers have limited capabilities when dealing with larger particles and leave dirty ions behind without a proper collection system. The most significant concern for most consumers is Ozone, however.

These machines can produce trace amounts of Ozone, which causes everything from inflamed lung tissue to asthma attacks. The FDA regulates ozone output indoors to under 0.05 PPM, but it’s something to be aware of when shopping for budget-friendly ionizers.

Ionizers are an excellent choice for certain types of indoor pollutants like smoke but should be part of a multistage air purifier to be truly effective. If you are looking for a high-quality system for your home, our guide features only the best models, including several top-tier purifiers with an ionization feature.

Q: What’s the most effective type of ionizer?

A: Systems that utilize an electrostatic collection plate. They collect particles in a similar fashion to a filter but can lose efficiency quickly when the plates become dirty.

Q: Is it safe to run an ionizer while you are in the room?

A: Yes, as long as it’s a certified ionizer and not an Ozone generator.

Q: How long should I operate an ionizer?

A: That all depends on the conditions in the room where it’s placed, but your user manual should give you a good idea of operating time. It’s also important to turn the ionizer off whenever you change filters in the air purifier; otherwise, the dirty particles can’t be collected.

Q: Where should I place an ionizer in a room?

A: The best place to put an ionizer is in an open space away from walls and other objects that may impede the airflow. Depending on the technology used, you may want to steer clear of electrical devices like television sets or microwaves, which could potentially cause interference.

A: Negative ions can help improve the air quality indoors, but the jury is still out on their psychological impact. Studies have shown some promising results with its ability to combat depression, but these ionizers aren’t for therapy – it’s for air purification.