When was your ductwork last replaced? Never?

Many HVAC experts suggest that because of heating and cooling, expanding and contracting, rusting and leaking, the ductwork in your home should be replaced every 15 to 20 years. At Pick HVAC, our experts think its condition is the key to when replacement is necessary. If your ductwork is in good shape, why replace it? Have it inspected every few years – a technician can do this during an annual cleaning of your HVAC system in the late summer or late spring.

Maybe the recommendation of every 15-20 years will have you checking your ductwork to see if perhaps it is time to replace it.

Major Point: If you switch out your ductwork, consider replacing your old rectangular ducts with spiral ducts.

Advantages of Spiral Ductwork over Rectangular

We wouldn’t make a statement we can’t back up. Here is our reasoning and the conclusion we’ve made in the rectangular ductwork vs spiral ductwork debate.

There are several reasons spiral ducts are better.

Just as blood flowing through our vascular system can be restricted by various kinds of blockages, so can the air in our HVAC system be restricted by features inside it. Here is one area where spiral ductwork is superior to rectangular because it minimizes static pressure. Static pressure refers to the resistance that faces both the air flowing through the system and the components of the system itself.

Seams, Screws and Creases, Oh My: A rectangular duct has a seam that runs its entire length. Depending on how it was made, it might even have two seams in opposite corners running along its length. Rectangular ducts are often transported to the job site unassembled as flat stock because it is easier to load them in a truck and they take up less space. When the duct is assembled, the seam is often secured by the use of screws. These screws protrude inside the duct. Also, a rectangular duct usually has shallow diagonal creases in each of the sides to stiffen the duct and prevent it from flexing when the air turns on and off. These factors all add resistance to the air flowing through rectangular ducts.

So here are at least four types of restriction that meets the air flowing through rectangular ducts: seams, creases, screws and greater surface area. These all increase the static pressure inside your HVAC system. “But it’s only air”, someone might say. Yes, but it makes the air handler – or fan – that is pushing the air work harder. When that happens, efficiency goes down, and the life expectancy of the components is also decreased.

Why Spiral is Better: In a spiral duct, there is no internal seam to restrict air flow. The seams are on the outside and there are no square corners or creases, providing a smoother surface for the air to travel. Screws are kept to a minimum due to fewer and better sealing joints. Smaller surface area means less resistance to air flow and less strain on the air handler.

The second efficiency advantage of spiral ductwork over rectangular is that air loss is much less with spiral. For many years, it was difficult to obtain less than 10 percent leakage in rectangular ductwork. With some improved methods for connections, a rectangular system might have as little as 3 to 4 percent leakage. But through meta analysis in the HVAC industry, the spiral-seamed duct came into being. Because it is practically airtight, and with many options for coupling and sealing the end-to-end joints, spiral ducts can often have as little as 1 to 2 percent overall air leakage. That’s a 50% reduction over the best outcome you can expect with rectangular ducts!

The main way that air is lost in rectangular ductwork is through the seams and joints. There is a longitudinal “lock” seam that runs the entire length of each duct section, as was mentioned above. In addition, air is also lost at every joint between sections, known as a “transverse slip connection”. Due to their increased weight and shape, there will usually be more sections than when spiral is used, and therefore, more air is lost with rectangular ductwork. 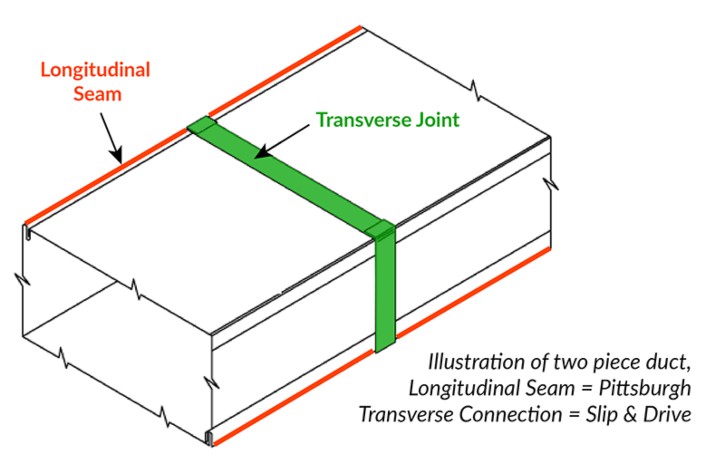 Hot/Cold Spots: Loss of air in an HVAC system could be likened to a leak in our vascular system. In a word, it’s bad – like losing blood. It causes lower pressure throughout the system, which means less air coming through the registers in your home. That means there may be hot spots and cold spots (depending on the season).

More Energy Use – Higher Utility Bills: What is your normal response to low air flow in your HVAC system? Crank it up! Either turn the thermostat down in summer or up in winter to compensate for the poor efficiency. It also might mean that a variable speed fan is running at its faster speed most or all of the time. Yes, your thermostat can eat money!

Spiral ducts, because of their inherent design, have no seams on their length to leak air. They also are made so that joints have a tighter seal than do those of the rectangular variety. In addition, because they are lighter, more rigid and easier to handle, spiral duct sections are often at least twice as long as rectangular ducts, meaning fewer end joints to leak air and less air lost through the tighter joints in the first place.

Spiral ductwork is not always less expensive than rectangular to purchase, though it sometimes depends on size. However, purchase price isn’t the only factor to consider when comparing the price of a spiral system to a rectangular system.

The total cost of installing spiral ductwork, including parts, packaging, labor, waste disposal, and more, can be up to 50% less than the cost of installing rectangular ductwork. This is due to some of the factors inherent in the design of spiral, including fewer joints, ease of handling and less time consumed to meet sealing requirements. Labor cost savings with spiral ductwork is the major factor.

Since spiral ductwork handles air more efficiently, one of the results will be a savings in the form of energy used in the operation of the entire system. The American Society of Heating, Refrigerating and Air-Conditioning Engineers (ASHRAE), which is very concerned about energy savings, recommends that circular duct be used whenever feasible.

According to the Air Conditioning, Heating, Refrigeration News, spiral duct was chosen 10 years ago by the decision-makers involved in the Pentagon Renovation Program to replace the existing duct system in the Pentagon with a more efficient, quieter, space-saving spiral duct system. This was part of a mandated plan to lower total energy costs by 35%.

The primary reason we have HVAC systems in our homes is to provide a clean and comfortable environment for us to live. Gone are the days of open windows on hot days that allow insects, pollen and dust to freely enter the house – that’s a given. But there are some ways that an HVAC system built with spiral ductwork is better than one built with rectangular ducts when we consider the comfort factor.

We spoke at length above about air leakage in ductwork. The lack of seams and overall tightness of spiral ductwork means there will be less dirt, dust and pollen that can infiltrate the system. We could probably add bugs and mold to that list as well. This means the air will be cleaner than that provided by a system made of rectangular ducts. In addition, because there are no flat surfaces or sharp corners, dust and other contaminants will not accumulate within the system but will be trapped in the filter. These same factors result in spiral ductwork being more easily maintained and cleaned than rectangular ductwork, meaning cleaner air in your home.

Because of the lack of friction and turbulence inside a spiral duct system, one of the results will be a quieter system with less rushing or whistling sounds. Also, since round or oval spiral ducts are much more rigid than flat, rectangular ducts, there will be no noise created by expansion or contraction due to the change in temperature or pressure that occur when the system starts and stops.

While this could be considered under the “Efficiency Advantages” (above), the fact that spiral ducts have less surface area means that less of our heated or cooled air will be lost through the walls of the ducts in unconditioned areas of your home. Whether the ductwork is wrapped in insulation or not, this translates to another advantage of spiral ductwork over rectangular when it comes to comfort.

Readers have questions; We have answers!

Q: Why do I hear my rectangular ductwork creaking when the heat comes on?

A: The most likely cause is the expansion of the metal joints that run the entire length of the square-cornered rectangular ducts. They are mechanically snapped together when the duct is assembled, and over time become loose enough to move just enough to make a noise. If your ductwork creaks when the heat comes on, it probably also does it after the heat goes off and the ducts cool down.

Q: How many return vents should my house have?

A: Ideally, there should be one return vent in each room unless it is a very large room. In that case, two or three would be better. Without return vents, your HVAC system will not be able to “breathe” very well and will have to work harder.

Q: Most of my ductwork is in the basement, which I never use. It is very warm down there in the winter. Should I insulate the ductwork?

A: Having a warm basement from a lot of uninsulated ductwork has its good and bad points. A very warm basement will help keep the floors above it warm, which can be nice on cold winter days. On the other hand, excessive heat loss through the outer surface of the ductwork means that less heat is getting to your registers. If you have a second story, this can be more of a problem than with a single-story house. Consider both points before applying insulation to the ductwork in a heated basement.

If you decide to insulate your ducts – here is our Guide on How to Insulate Ductwork in the Basement and Attic.