In this R22 vs R410A refrigerant guide, we compare R22 and R410A in practical ways to give insight into why the HVAC industry is making the switch and what you should be prepared for if you own an R22 AC or heat pump.

R410A is more efficient than R22, so SEER ratings of R410A air conditioners and heat pumps are higher when all else is equal. That’s just one point comparing R22 and R410A.

R22 is no longer manufactured because it damages ozone. Currently, R410, which doesn’t damage ozone, is the most commonly used in new central heating and air conditioning equipment, aka ACs and heat pumps. However, R410 contributes significantly to global warming, an issue separate from ozone depletion. As a result, other refrigerants, those with lower global warming potential, will overtake R410 in popularity by 2025 or 2030.

In addition to not harming ozone, R410A improves efficiency compared with R22, and that is surely part of its popularity.

Let’s dig deeper for readers who want the details of the R22 vs R410A comparison and what to expect if you have R22 equipment.

Why is R22 refrigerant banned? We begin here because this is the primary reason that the manufacturing of R22 has been outlawed and the HVAC industry is switching to R410A and other refrigerants like R32 – which is even less harmful to the environment than R410A.

Ozone depletion (ODP): The ozone layer is found in the stratosphere approximately 6-25 miles above the earth. According to NASA, the ozone layer, “acts as a shield to protect Earth's surface from the sun's harmful ultraviolet radiation. With a weakening of this shield, we would be more susceptible to skin cancer, cataracts and impaired immune systems.” So, most people agree protecting the ozone layer is a good idea, even if it means higher costs to consumers for new HVAC equipment – or for recharging an R22 system with diminishing stocks of the older refrigerant.

Global Warming Potential, or GWP: Greenhouse gases aren’t bad. Too much of them becomes a problem. The US EPA says, “Greenhouse gases (GHGs) warm the Earth by absorbing energy and slowing the rate at which the energy escapes to space; they act like a blanket insulating the Earth.”

Here are the most commonly agreed GWP measurements for these refrigerants:

That’s right. R410A contributes more to global warming than R22 – and that’s exactly why R410A will have a short stay at the top of the refrigerant popularity heap. R32 with a GWP under 700 and R454B with a 466 GWP will become the most-used refrigerants in residential HVAC equipment by 2030. 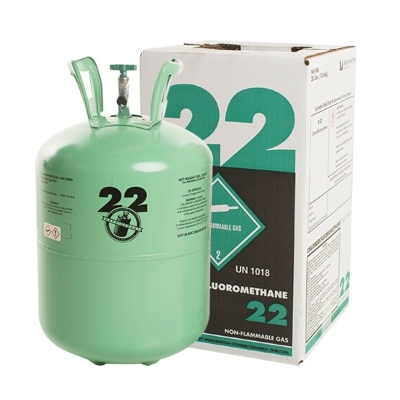 If your central AC or heat pump is over ten years old, it probably uses R22.  This widely used refrigerant is more commonly referred to as Freon, an R22 brand name.

R22 has been on the way out ever since it was discovered that R22 is very harmful to our ozone layer since it is a hydrochlorofluorocarbon (HCFC).  According to law, R22 can be used when servicing existing air conditioning units, but it cannot be used in new installations of AC units or heat pumps. It won’t work in today’s new systems anyway.

While not a major point in R22 vs R410A, the type of compressor lubricant used in R22 systems is mineral oil, while R410A compressors are lubed with synthetic oil. 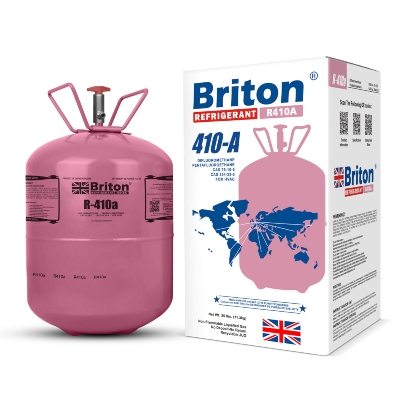 In an effort to produce a refrigerant that doesn’t deplete ozone, R22 has been phased out. And R410A is the most common substitute for central air conditioning and heating split systems – an outdoor AC or heat pump and an indoor furnace or air handler.

R410A is a hydro-flurocarbon (HFC) and is safe for the ozone layer. ODP = Zero. Puron is a brand of R410A developed by Carrier, and for some, the name is synonymous with R410A. DuPont calls it Suva 410A. Honeywell has branded it Genetron AZ-20.

In 2015, R410A became the standard for all residential air conditioning units.

OK, so you’ve got an AC or heat pump that uses R22. The refrigerant leaked out or the compressor failed. What now? Have you seen the price of R22?

Replacing R22 with R410A isn’t a good idea. First, if you tried to replace R22 with R410A without modifying the equipment, your entire air conditioning or heat pump would probably be damaged beyond repair.  The oil used for the compressor in R22 is mineral oil, as noted, and synthetic oil is used in R410A.  The lines in an R22 unit are not capable of operating with the synthetic oil, since R410A operates with higher pressure than R22.

If you decide to switch an R22 unit to R410A, which is almost never done, you would have to change out the compressor and refrigerant line set, at minimum. The cost to do so would be at least $2,000, and that doesn’t make sense.  You would be better off putting the cash into a new air conditioner or heat pump that will be more energy efficient and come with warranties of at least 5 years on parts – the industry standard is 12 years – and a compressor warranty of 10 years to Lifetime depending on the brand.

No. The refrigerants and the equipment just aren’t compatible. For one, the difference in oils and how the lines handle the pressure make it impossible to use R22 in a R410A system.  It’s a poor analogy, but would your car’s engine run if lubricated with vegetable oil? Sure, for a while. But the long-term prospects wouldn’t be good.

Here are a few more issues we get asked about in the R22 – R410A comparison.

What is the difference on how R22 and R410A perform?

The performance ratings of R22 and R410A in an air conditioning unit are not even close.  R22 is not safe for the environment.  Secondly, R410A performs more efficiently, meaning it does a better job of absorbing and moving heat from one place to another and then releasing it – the goal of both an AC and heat pump.  This allows your air conditioner or heat pump to run cooler, and it lowers energy use and costs.

There are a couple benefits. Remember we said the GWP of R410A is higher? But since the refrigerant is more efficient, the total amount of emissions can be lower than equipment using R22. Let’s say the R410A is 25% more efficient – it varies due to the design of the specific heat pump or AC, but that’s an average. The GWP’s of both were listed above. Let’s use those numbers for an equation:

This means that the total GWP of an R410A unit vs an R22 unit over its lifetime is lower.

The price to purchase R410A is much lower than the price for R22 most of the time. We italicize that because the COVID pandemic has caused supply chain issues leading to shortages of R410A and some pricing lunacy.  Although the market prices change constantly, you can expect to pay $4-$6 dollars per pound for R410A.  R22 can cost up to $35 per pound, though about $20 per pound, as this shot shows. Note the number of pounds and the cost.

Note on Supply of R22: The manufacturing of R22 ceased in 2020, so not only is R22 more expensive than R410A, but it is also very difficult to obtain due to diminishing supplies.

Yes, but as of 2020, R22 is no longer being produced or imported.  This phase-out was created by the Clean Air Act of 2010. Limited supplies of R22 are available, and some of it is recycled/reclaimed R22.

Should I convert my AC system to R410A or should I buy a new HVAC system?

Conversion is possible but not recommended. The conversion is a time-consuming and expensive process. You will have to replace the compressor, accumulator, expansion valve and possibly the entire line set.  This will take a professional HVAC technician at least 8 hours to complete.

Factoring the labor costs and the material cost to convert from R22 to R410A, more than $2Grand in most cases, it is a better choice to install a new air conditioning unit. In the long run it will be more efficient and better for the environment.

This question seems to be better phrased as “can Puron/R410A make air colder than Freon R22?” Well, R410A performs much more efficiently than R22.  As a result, it will cool a room slightly quicker – and use less energy to do it. But R410A can’t make a room colder than R22. They both absorb heat during an AC mode and remove it from the air inside, thus making the air colder.

Yes. And it won’t be long. There are already rumblings about the best replacement refrigerant for R410A, and R32 and R454B are the likeliest to be used in split system central ACs and heat pumps. R32 is used in some room air conditioners like window air conditioners and portable air conditioners plus some mini split AC/heat pumps. It is significantly less harmful to the environment than most other refrigerants and offers good efficiency performance.

Which is better…..R22 or R410A (Freon or Puron)? In a sense, it doesn’t matter, since R22 is quickly becoming obsolete. R410A, while far from the most ecofriendly refrigerant, is better than R22 since it doesn’t deplete ozone. It has higher efficiency too, so will lower operating costs for heat pumps and air conditioners.

If you have the choice between upgrading an R22 system to use R410A or replacing the equipment, choosing the latter – a new heat pump or AC that uses R410A – is a better use of your money.

Recharge Home AC – All You Need to Know