Though most modern gas furnaces and water heaters employ the use of electricity in their ignition systems, electric is actually a relatively new form of ignition when looking back on the history of HVAC systems. In fact, for decades, standing pilots have been the ignition system of choice to light the burners in furnaces and water heaters and their use has been widespread. So why would anyone want to upgrade to a system that include this newer type of ignition? When we weigh the pros and cons of each, you may be surprised to find that the answer isn’t the same for everyone. 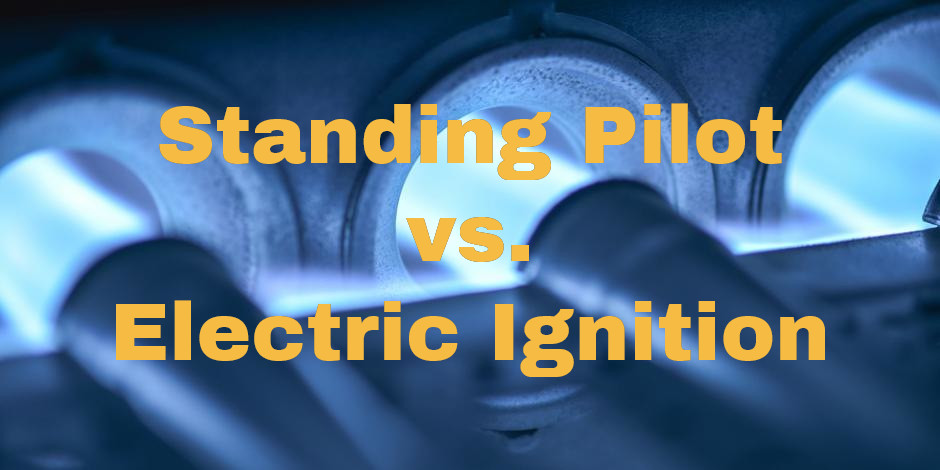 Conventional pilot lights may have been the norm for years, but they’re far from efficient when compared to the more modern electric ignition furnaces on the market today. Because a standard pilot requires a small, yet, constant flow of gas to keep it lit, it’s a rather wasteful ignition system. A standing pilot light, for example, consumes at least 600 to 800 BTU/hour of fuel for 24 hours a day, 7 days a week. The price of this fuel can certainly add up and increase the cost of your gas bill.

When we talk about electric ignition systems, however, there are actually two types: a hot surface ignition and an intermittent pilot. The most common type, the hot surface ignition, works by using an electric current to heat up and ignite the burners. Unlike a standing pilot, this type of ignition is only turned on when the furnace is ready to begin a heating cycle and, in this way, prevents the constant flow and waste of fuel.

The second type of electric ignition is the intermittent pilot and is, in essence, a cross between the two others. An intermittent pilot uses a small, gas-powered flame to ignite the burners, but unlike a traditional standing pilot light, only burns when beginning a heating cycle. Though it still uses additional fuel, as soon as the burners ignite, it is shut off. In this way, it prevents the unnecessary waste of extra fuel and it falls more in line with the hot surface ignition than the standing pilot.

Because of their universality, most furnaces that use a standing pilot ignition are cheaper than their electric ignition counterparts. Electric ignitions are found in newly-manufactured furnaces and water heaters and with that technological advancement comes improved efficiency which ultimately lends itself to the price increase.

Apart from the initial cost of the unit, however, are the parts and repairs themselves. Should a thermocouple or thermopile need replacing, for example, a part like this is easy to come by and readily available from nearly every HVAC technician, plumber or hardware store. Electric ignitions, on the other hand, can end up requiring more expensive replacement parts, such as a furnace control module, that can be more difficult to repair.

With decades of use in most homes, furnaces and water heaters with standing pilot ignitions are tried and true. They have not only been proven to be effective but safe, too. Like most things, however, standing pilots aren’t without their share of issues. From the pilot light blowing out to a blocked gas line, these issues can hamper the ease of use, but they’re also relatively easy to fix, and with regular and proper maintenance, shouldn’t be an issue for most.

While electric ignitions are just as easy to use, they don’t suffer from the same issues as a standing pilot. Because there is no flame or gas line at work when using a hot surface ignition, fickle pilot lights or blocked lines aren’t a problem. However, in the event of a power outage, electric ignitions don’t fare as well. Unless your system is set up with a backup battery or generator, you won’t be able to heat your home without power. In this scenario, a gas-powered furnace with a standing pilot is the comes through when it’s needed most.

Ultimately, the choice of furnace ignition comes down to reliability, efficiency, and even access. Both types of ignition have proven to be reliable, though neither is perfect. If efficiency is of the utmost importance to you, electric ignition systems will prevent the waste of fuel needed to burn the pilot light and can save you a small amount on utility costs. It should be noted, however, that for some, the choice will be much easier. In fact, if gas is not available in your area, options are automatically limited and having a standing pilot is out of the question. To determine whether or not a standing pilot or electric ignition is right or possible for your home, contact a trained professional who can help you assess your heating needs.