Air purifiers have seen an increase in popularity in recent years as homeowners strive to improve the air quality indoors. These devices are renowned for their ability to remove certain types of particles from the air, but many consumers wonder if air purifiers help with odor and smells? Well, we’re going to answer that question in this guide and provide some tips to help you keep the air clean in your home.

While you can find air purifiers that use activated carbon or ultraviolet light to scrub your air, they all have one goal. That’s improving the indoor air quality in your home, which often results in the removal of odors.  That often involves the use of filters, which can help clear up airborne particles but aren’t always the most effective against certain types of smells.

If you have purchased an air purifier or considered adding one to your home, you’ve probably also looked at high-quality air filters. Given that some can cost almost as much as a budget-friendly air purifier, it leaves many consumers wondering what the difference is between these two filtration methods.

Air purifiers use materials like activated carbon or techniques including Ionization or Ultraviolet light to clean the air in your home. A fan pulls air into the machine, where filters trap particles before being passed through additional cleaning stages. Those will vary from one machine to the next, but the purifier will blow fresh air back into the room where it’s installed at the end of its cycle.

By comparison, an air filter can be made from a variety of materials and are typically rated by MERV, MPR, or FPR. While they can block many of the same particulates an air purifier can, they don’t actually “purify” the air with advanced techniques… they just filter the air and trap the particles.

Do Air Purifiers Help with Smoke? 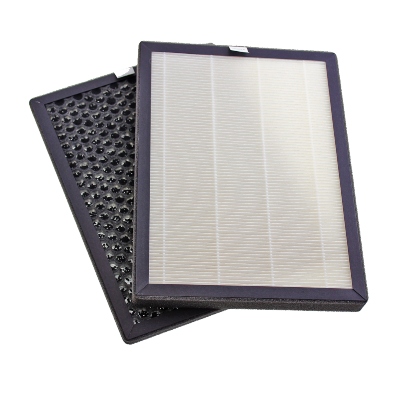 The top question our readers ask us regarding air purifiers is their ability to remove the smell of smoke from the air. The good news is, it’s something plenty of systems excel at, although some types of smoke are harder to clear up than others.

There are two types of smoke people encounter in their homes – cooking smoke and cigarette smoke. If you have a range hood vent in the kitchen, that can help with odors, smoke, and steam from cooking. When you smoke or need to clear up odors from cigars and cigarettes, you’ll want to purchase an air purifier specifically designed to deal with smoke.

Smoke produced by burning tobacco is considered a gaseous pollutant that is incredibly difficult to clean. The best defense against smoke is a two-stage system that utilizes HEPA filtration and activated carbon. The HEPA filter works to trap ultrafine particles produced by smoke, while stages with activated carbon are designed to deal with odors.

HEPA filters are tested in a lab under strict conditions and can remove 99.98% of particles that are 3. microns in size or larger. While there are a variety of True HEPA and “HEPA style” filters, they only trap particulates, which is half the battle when you’re dealing with odors produced from smoke in your home.

Activated carbon or charcoal has been used to fight odors for ages. It can remove impurities and smells from water with ease but is commonly used in the air quality industry as well.   This unique form of carbon has been processed so that it’s covered in pores, which increases the surface area.

The porous surface essentially acts as a sponge, enabling it to remove VOCs, odors, and gaseous pollutants from the air. Activated carbon filters are combined with a True HEPA filter for maximum filtration, but how effective they are depends on the size and type of carbon used.

Most companies only use a minimal amount of this material in their air purifiers, while systems like the Austin Air Healthmate Plus have 6 pounds of activated carbon that’s been impregnated with potassium iodide and zeolite. Needless to say, it can run circles around traditional systems with normal carbon filtration.

Do Air Purifiers work for Mold and Mildew?

While we get hundreds of inquiries regarding the removal of smoke odors, unpleasant smells caused by mold and mildew are a close second. They are often harder to get rid of, considering you need to address the underlying cause or the air purifier is only a temporary solution.

We aren’t going to explain how to locate and remove mold from your residence, but we can tell you that there are around a dozen types of mold spores that are commonly found in homes. That includes Penicillium, Cladosporium, and Aspergillus, along with its multi-colored brethren.

Mold like Alternaria can set off an asthma attack, while Stachybotrys Chartarum, otherwise known as Black Mold, is one of the worst types to find in your home. Even if you keep a tidy house, the spores can find their way in through windows and air vents.

HEPA filters and other types of filtration may claim they can defeat mold and may help with odors, but you have to “kill” mold spores, not trap them.

If you’ve considered an air purifier that uses ionization to destroy germs, you could be sorely disappointed with its performance against odors and smells. An ionizer emits negatives ions into the air, which attach to airborne particulates, making them too heavy to float through the air.

While this technology is a great way to knock spores from the air, it doesn’t actually kill them. Ionization can “freshen” up the air temporarily, but you’ll still need to deal with the underlying cause of the moldy odor in your household.  They also can produce ozone, which is harmful, although not a problem with high-quality machines.

Ultraviolet rays are great at reducing germs in the air and on surfaces, and we’ve seen an influx of manufacturers begin to include them in their purification systems. It’s a technology that’s well worth the price for certain types of airborne issues but just like with ionization, not the best choice for mold.

UV-C light can keep mold from growing inside our air ducts or the tank of a humidifier, which can prevent odors from appearing in the future. If you already have a musty smell from mold present in your home, it’s another temporary solution.

UV light and ionization are the two most common active technologies found in air purifiers today, but they aren’t the only options. Plasma air purifiers have a similar approach to machines that ionize the air, while MoLEKULE uses free radicals to disrupt bacteria, mold, and VOCs at a molecular level. Both techniques can help with odor and smells but are part of multistage purification systems.

Simply put, if you have a funky smell in your home caused by smoke, pet odors, or even mold, an air purifier can help to a degree. Carbon-based purifiers are the best choice against any type of smell, but all these measures are just a stop-gap until you find the source of the odor and address it directly.