Capacitors are found in millions of air handling units across the United States. That includes small window AC units and whole house fans along with traditional HVAC systems with blower motors and compressors. It’s also the most commonly worn out component on AC units, and in this guide we’ll tell you how to diagnose and address a bad AC capacitor.

The Importance of Capacitors in HVAC Systems

Capacitors are something you’ll find in a variety of HVAC equipment as they provide a boost and help regulate systems while they are running. They are essentially small internal batteries that can deliver power in short bursts when required, but only when they are functioning properly.

AC capacitors come in all shapes and sizes, but did you know there is more than one type of AC capacitor? The term itself can cover three styles including a run capacitor, which is used to ensure stability while your system is running. A start capacitor, on the other hand, serves an entirely different purpose despite a similar design.

These capacitors disengage after they help the motor “start” and get up to speed, and an HVAC system can have one or both. Dual capacitors are also popular as they combine a start and run capacitor into a single form factor which saves space. Regardless of the type that’s installed on your system, when they go bad, serious problems can arise.

Symptoms of a Bad AC Capacitor

As with most devices, there are a few ways you can tell if a capacitor is going bad in an air handling unit. These symptoms are easy to diagnose with no special tools required and may allow you to quickly diagnose a potential issue.

Do you hear a humming noise from the unit when it cycles on? That’s usually not a good sign, as that electoral hum could be a capacitor begging to fail. If there is a buzz or humming and no air is produced, you certainly have a problem at hand.

If the unit is blowing air, but it’s not cool that can also be an issue with a capacitor. You can attempt to turn off, let it rest, and try turning it on again. If that doesn’t clear up the problem, the capacitor could be faulty, and you’ll want to bring in a technician to have a closer look.

When an HVAC system won’t turn on at all, the first thing you should do is check for power. If no breakers have been , and the unit still doesn’t work, the start capacitor could be bad in the system. If it doesn’t get the “boost” it needs, it may not start or could start slowly which is another sign of a bad capacitor on a motor.

Two other signs of capacitor failure are an increase in your energy bill and systems that shut off randomly. Again, there are other reasons both of these things can occur, but as you’ll see, a bad capacitor is the culprit more often than not.

How to check if an AC Capacitor is bad 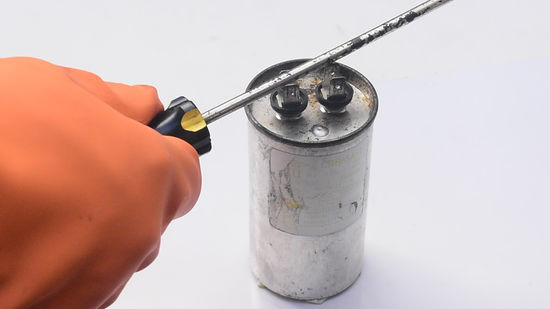 Capacitors are tied to motors, and there is one simple way to see if there’s an issue with most HVAC systems that produce a hum, but aren’t operating properly. First, turn your system on and then head outdoors to the condenser unit.

On most models, you should be able to see the fan blades through a vent on the top. Depending on the age of the unit and air handler, this next step may require a screwdriver and a few bits. If there isn’t enough room to fit a thin stick through the vent to touch the blade, you’ll need to remove the grill beforehand. 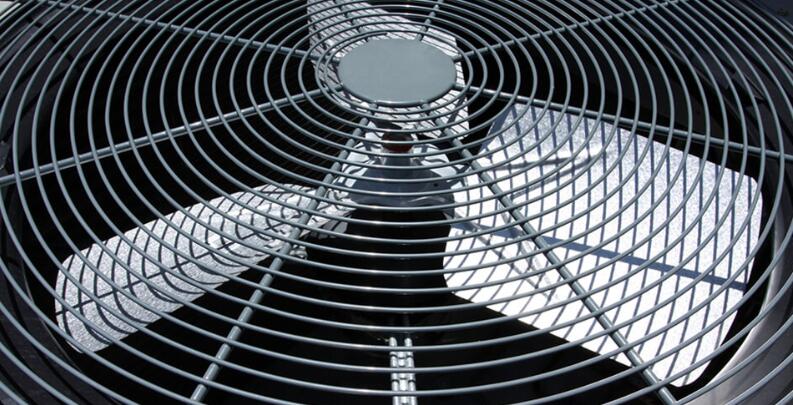 When you have access, take a thin object like a stick and use it to push against one of the fan blades. Do not use any conductive material like metal and keep your fingers away from the blades at all times. If the fan spins freely, you just “kick started” the unit which means the start capacitor has failed or is failing.

If the blades do not spin, that means you may have an obstruction inside of the unit or the motor has failed. In either case, it’s time to shut off the system and call in a professional HVAC technician to assess the situation.

You can also attempt a physical inspection of the capacitors if you are comfortable removing service panels to locate the capacitors. Two signs of damage include visible cracks to the casing, capacitors that are bulging at the top or bottom or fluid discharge from the capacitor itself.

Once you realize there is an issue with a capacitor in your system, there are two things you can do. You can make a service call to an HVAC company or try and diagnose the issue further. If you want to figure out exactly which capacitor is faulty or even price a replacement, you will need to acquire a multimeter. A VOM or multimeter is a device that can measure resistance, current and voltage.

These can be used to test a capacitor to see if it’s faulty, but only when used properly. It’s not something to attempt if you are uncomfortable with electricity and you should understand the dangers of capacitors as well. While the video above shows capacitors with visible damage being tested, as you can see from AC Service Tech’s video, it’s a different story when they are still attached.

Bad AC capacitors are something that affect homeowners each year, but if you know the symptoms of a faulty capacitor, you can prevent more problems down the road. Failing to have a capacitor replaced can result in motors overheating and premature breakdown of parts in your system as well.

Q: What causes a bad capacitor in an AC unit?

A: Bad capacitors can occur for a variety of reasons including the age of your unit itself. They are the most commonly replaced part, but can also experience damage from things like extreme heat, over cycling, and short circuits.

Q: How long do capacitors last?

A: On average, you can expect an OEM AC capacitor to last 20 years. The lifespan on replacement capacitors depends on the quality and brand, however.

Q: Will my system still function with a bad capacitor?

A: Yes, but it will struggle and not function as it should. Eventually, your system will stop working and damage could occur.

Q: Can you replace a start capacitor with a run a capacitor on an HVAC system?

A: It’s not recommended as they are designed to perform different functions. Dual capacitors are an option, but it’s best to replace a failed capacitor with an exact match.