Since the inception of modern air conditioning systems, the debate between ceiling fans and AC has kept people questioning whether air conditioning is really necessary when a seemingly cheaper alternative exists. In fact, it’s raised more questions than it has answered. While everyone may have their own theories about which is better, the short answer is that a ceiling fan can’t do the same job that AC can, though they still have their place in some homes. In order to bust the myth that ceiling fans save money and energy, however, it’s important to take a step back and take an honest look at both technologies from a financial, economic and practical perspective.

A Quick History of AC and Ceiling Fans

In order to understand why AC reigns supreme over ceiling fans, we have to go back to the beginning. Though small window air conditioners were affordable to the average household by the late 1940s, it wasn’t until the late 1960s that central air conditioning became a common fixture in most homes. By today’s standards, however, the technology was primitive and extremely inefficient. Not only was duct work poorly routed but most large rooms only had one vent. This design flaw caused these spaces to feel unbalanced in temperature with one side feeling cold while the other remained warm. In order to compensate for the uneven cooling, ceiling fans were used to increase airflow and better circulate the cold air to the rest of the house. This is when ceiling fans were most useful. Their popularity never waned, however, and many people still install fans in their homes today with the hope they’ll cut energy costs and save money. Unbeknownst to them, it could be doing the opposite.

Though installing numerous ceiling fans in your hope may be the cheaper option, it’s clear that air conditioning works in ways they just can’t match on a fundamental level. Air conditioning, while more expensive, just works. It has the ability to adjust the temperature of the air in your home to a cooler level and create a comfortable environment. Ceiling fans, on the other hand, simply circulate air. This air cools the skin, which can help your body to cool itself, but it doesn’t have a cooling effect on the room or house.

If you think that running a ceiling fan while running the AC only stands to make it more effective, you’d also be wrong. Because modern AC units and homes are equipped with elaborate duct work and much more robust ventilation for even cooling, a ceiling fan only messes up the flow and prevents the cold air from making its way back to the air conditioner to be cooled and recirculated again. In this sense, an air conditioning unit can be likened to the human heart. It pumps out air to each room in the house, much like the heart pumps out blood to the extremities. Theoretically, if you turned on a fan in one of your extremities, the blood would be trapped and have a tough time making it back to the heart. The same can be said about the air in your house.

While ceiling fans may make air circulation less effective in modern homes, particularly ones with AC units installed in 2005 or later, ceiling fans in homes with air conditioners from 1995 or earlier are actually recommended to increase air flow. The bottom line, however, is that ceiling fans don’t improve an existing air conditioning units output or temperature, though some may enjoy the feeling they provide.

The Real Cost of Ceiling Fans 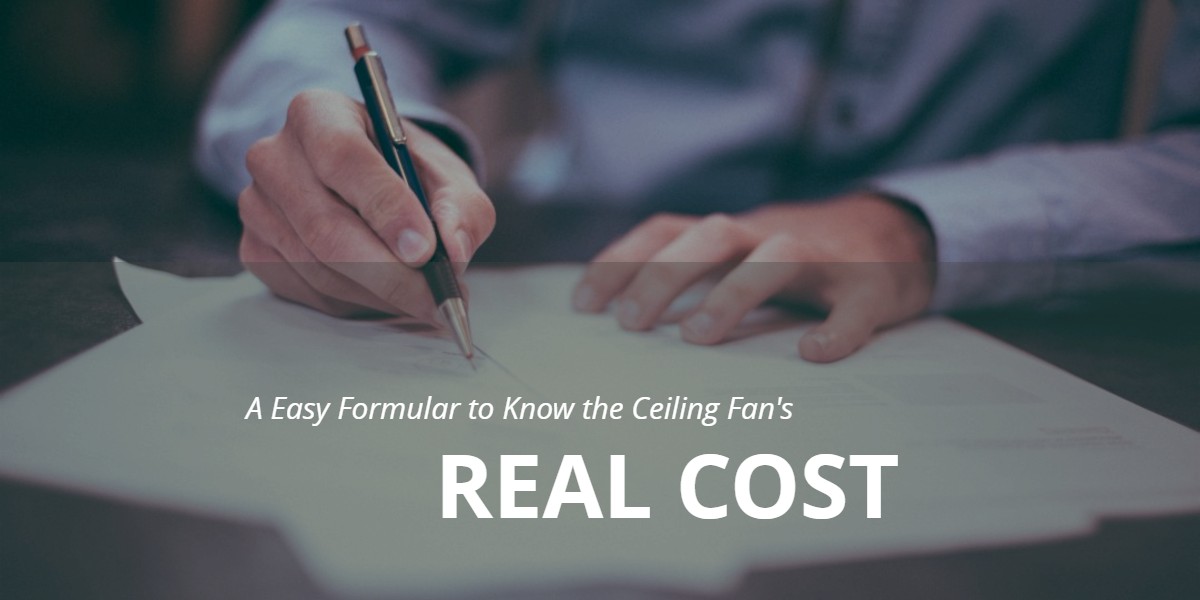 While ceiling fans don’t directly save you money and energy, they can play a role in reducing your costs if used properly. The real catalyst for saving comes when you turn your thermostat up, however. By turning up the temperature in you home by a few degrees and running a ceiling fan only in the rooms you are using, you can somewhat offset the temperature increase. In fact, a 2002 study found that only two percent of people turn up their thermostats when using their ceiling fans, but that it could result in a 15 percent reduction in energy costs.

As an example, if you purchased and installed five average-priced ceiling fans for $250, each for a different room, the cost would come to $1250. If you then adjusted the thermostat by ten degrees for a 10% reduction on a $200 per month bill, you’d save $20. In order to pay off your initial investment, it would take approximately 62.5 months or a little over 5 years. If you also factor in the cost to run the fan, however, at $0.01 per hour and subtract it from the original $20 savings, it would end up taking you around 18 years to pay off your investment.

In this scenario, you’d not only be waiting 18 years to pay it off, but you’d also have to run your thermostat 10 degrees higher than normal for the duration. Once you break it down and do the math, it’s clear the savings aren’t what has been promised by so many before.

How to Save Money by Right Using Ceiling Fan?

Like stated above, in order to use a ceiling fan to reduce your energy consumption and ultimately cut your costs, you must turn your thermostat up. The savings will come from cutting your AC usage, not by turning on the fan, although the fan will help to balance the increased temperatures. This is also assuming you turn the fans off when you exit a room.

Another way to save on your electric bill is to purchase and install a programmable thermostat, one that will adjust its temperature settings based around when you are home and away. By using a thermostat like this, you will avoid paying for air conditioning when you’re not home to use it.

Finally, if you’ve got the money to invest, purchasing an AC unit with a high SEER will ensure it runs most efficiently to save you money in the long run.

Ultimately, ceiling fans are much like oscillating or box fans—they provide a bit of breeze to help you sleep or cool you down temporarily, but they don’t cool down a room, let alone a house. Unfortunately, their power saving abilities have been grossly overstated. While they made be affordable to most, they won’t make much of a difference compared to an AC unit unless you spend decades under-cooling your home in an effort to save a few bucks. At the end of the day, it’s simply not worth it.