Each year millions of homeowners turn to ceiling fans as a supplemental way to cool areas in their home. Whether it’s cooling down a room in the summer or using reverse mode in the winter to move warm air, they are a mainstay in households around the globe. They can also be difficult and expensive to replace.

If you have an older ceiling fan with a broken pull chain or are simply tired of getting up to control your home, we have just the solution for you. In this guide, we’re going to take a look at the best smart fan controls for old ceiling fans which are guaranteed to make life easier regardless of the weather indoors or outside.

While most of the control systems on our list are capable of controlling ceiling fan speed, most require an add-on if you need to dim the lights. This smart fan control from Treatlife manages to solve both of those problems and is one of the most highly-rated devices of its kind on the market today. 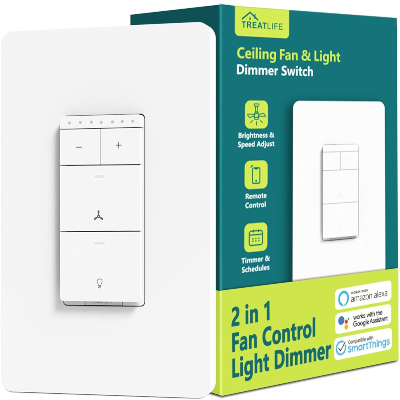 Treatlife’s smart control may look simple, but don’t let those looks fool you. The streamlined switch has four buttons, two of which allow you to cut the fan or lights on or off. The + and – buttons above those are for adjusting the speed and lights. It can handle four standard speeds like most models, but can also take the ceiling fan light from 100% to 10% in a matter of seconds.

This single-pole controller requires four wires for installation but does not need a hub to connect to a WiFi network. When enabled, you can use the company’s mobile application to control your fan from anywhere. Other noteworthy features include a countdown timer, scheduling, group control, and the company’s Sunset Tracker.

The highlight of the Treatlife FR-FAN-15H-484 may be its dimming capabilities, but its connectivity features are a major perk. There are no significant negatives for this model, with the only drawback being the lighting for some as the max light load is listed at 150watts. If you want to control multiple ceiling fans, the company also sells this controller in an affordable 2-pack.

Leviton is a company that produces a wide range of tech from humidity sensors and surge protectors to home automation. That includes dimmers, switches, and fan speed controllers like the Leviton DW4SF, a stylish switch with some nifty features. 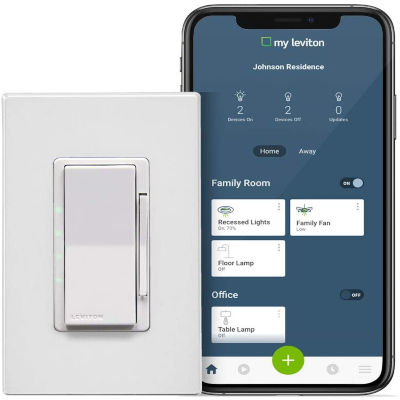 This is another switch rated for 1.5A fans with four speeds, and the ability to connect to your home network. With the right hub, you’ll be able to control the ceiling fan using your voice, although no hub is required. This smart switch can sync up to your home’s WiFi network in seconds, and their mobile app opens the doors to features like scheduling or vacation mode.

Being able to go hub-less is just one advantage of this ceiling fan switch. A large rocker lets you turn your fan on or off, but there is a bar on one side that is used to dial the speed up or down. LED lights on the opposite side give a visible marker of the speed, but are discreet and quickly fade away. The DS4SI requires a neutral wire like most kits of this nature.

While it’s not challenging to find a smart switch that will work with a hub, there are only a handful of models that sync directly to your Wi-Fi network. The Decora is one of them, and it can even control your lighting when paired with the DW6HD dimmer. It’s arguably the smartest controller on our list and has a very nice price point as well.

Thanks to advances in technology, there are multiple ways to solve common problems around your home. Those same rules apply to technical gadgets like fan controls as well. While there are a variety of receiver kits available, the FanSync system from Fanimation is the best. 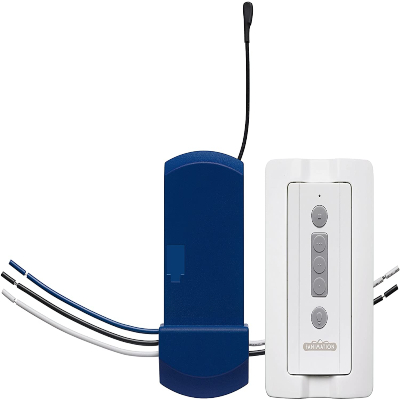 Unlike other smart controls on our list, you don’t need to wire a wall switch to use the FanSync receiver. Instead, it’s wired into the fan itself, which makes it an interesting alternative for homeowners that want to leave their wall switch alone. Where it’s installed varies, but Fanimation has kits for the uplight, downlight, and more.

This FanSync system comes with a hand-held remote, but the real draw is the ability to connect to your home’s Wi-Fi network through the FanSync app. This makes your ceiling fan even smarter, although this kit is only set up for 3-speed fans with an AC motor. If you have a fan with a DC motor, you’ll want to opt for another solution from the company.

Fanimation’s receiver isn’t the only product of its kind, but it is the best. They have a number of variants that will work with almost any fan, and the ability to use Bluetooth or Wi-Fi is the icing on the cake. We chose the BTT9U as it can be mounted in two different areas, but the BTR9 is a better choice if you don’t need the remote and want something a bit cheaper. 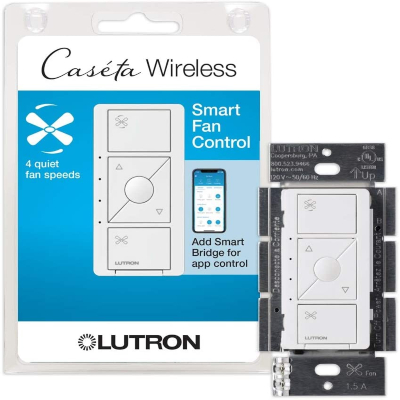 This smart wall switch supports up to four speeds and gives you the ability to turn your ceiling fan on or off without having to pull on a chain. It’s rated for single-pole ceiling fans up to 1.5A, and with the proper hub installed you can quickly connect the fan to Alexa, Google Assistant, Apple’s HomeKit for voice control.

While this kit is simple to install providing you have a neutral wire, you can extend the capabilities of the PD-FSQN through a few interesting extras as well. There is a package that comes complete with a Pico remote control, but you can also pick up a wall bracket or the PJ2-3BRL if you want 3-way control over your system.

The PD-FSQN is a simple, but highly effective solution for homeowners in need of an affordable switch with speed control. You can control your fan with the Lutron app as well, and you aren’t just limited to white as it also comes in Black, Ivory, and Light Almond. Reviews have been overwhelmingly positive aside from scattered reports of compatibility issues with Hunter fans.

When most people think of a smart fan, the first protocol to come to mind is Wi-Fi. Well, that isn’t always the best solution, especially if you already have automated devices in your home. If you’re partial to Z Wave, the HomeSeer HS-FC200+ fan control should be at the top of your list. 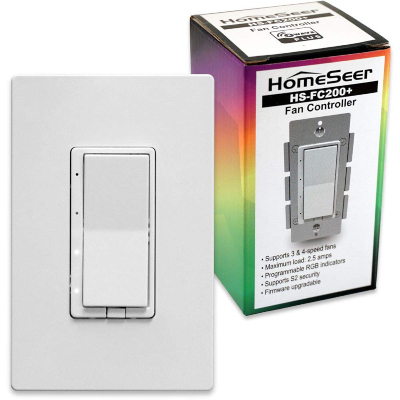 If this unit were sitting on a shelf, you might pass it by without a second look. It’s rather unremarkable without a trim plate, but the tech inside this switch is impressive. By using the Z-Wave protocol, you can set the switch to perform up to 14 possible triggers through a series of simple taps. When you want to set something in motion, simply tap the paddle 1-5 times.

Another perk of this Z Wave switch are the RGB indicator lights. There are seven that run down one side of the switch, and these multicolored LEDs act as indicators for other items in your home. You can program them to blink or glow depending on your needs, which makes the HomeSeer HS-FC200+ highly customizable. Throw in S2 Security and Alexa compatibility and you’ve got a fan control that’s tough to beat.

This ceiling fan control from HomeSeer is one of the best on the market and has been well-received by consumers across the board. We like the fact it can work with fans with a higher amperage load, but it obviously won’t be for everyone due to the Z-Wave protocol.

How to Find the Best Smart Fan Control for your Home

Smart fan controls aren’t a new niche, but one that tends to go under the radar. Ceiling fan manufacturers would much rather sell you a new fan than allow you to upgrade your existing one. That said, there are a number of viable options if you want to give your old ceiling fan some brains, and we’re going to tell you what to look for when shopping for the best smart fan controls.

Aside from a few unique variants, smart fan controls typically come in two formats. There are controls that replace the existing switch on your wall, and kits that are installed on the fan. While the former is more popular, both have distinct advantages and disadvantages.

How will you connect?

There are many reasons to upgrade a ceiling fan to a smart model whether it’s a broken pull chain or based on convenience.  How these devices actually connect to your home network varies quite wildly, however, and should be the first thing you consider after whether you are interested in a kit or a smart wall switch.

Do you have automated gadgets in your home like blinds and thermostats or is all of your tech handled by a router? If you want to add Wi-Fi capabilities to your ceiling fan, there are a couple of options to consider. Some switches are designed with Wi-Fi that’s built-in while others require a hub like Amazon’s Alexa or protocols like Zigbee.

Homeowners that want to control their ceiling fan with their voice have the widest selection to choose from. Some kits and switches come prepackaged with hubs alongside models that rely on Zigbee and other protocols for home automation. While these kits are cheaper than a new ceiling fan, you should still consider how your network is set up at home and congestion.

There are three areas you’ll want to keep in mind when shopping for a ceiling fan control to make your old fan smart. Two of those are speeds and amperage, and if you get those wrong, your new upgrade will be dead in the water.

Most ceiling fan controls are rated for ceiling fans up to 1.5amps. That’s common, and what 90% of residential fans are rated for. There are some switches with higher ratings, however, so look before you leap and make sure those numbers match.

The same rules apply to speed controls. In our research, we found that most units support up to four speeds. The standard for older ceiling fans is typically 3 speeds, but some control kits are only rated to handle 3 speeds, instead of four.

Speed and amperage are only part of the equation with smart fan control systems. If your older ceiling fan has an overhead light fixture, you may want to control it from your smartphone or through hubs like Google Assistant or Alexa as well.

As you can see, there are a variety of ways you can upgrade an old ceiling fan from new switches to modules that sit inside the housing itself. You also don’t have to be a rocket scientist to install a smart fan controller, you simply need to follow the instructions and buy the right setup for your home. If you are uncertain about the type of controller required for the wiring in your home, don’t hesitate to call an electrician before attempting this project yourself.