There are many ways to keep your home cool from central AC systems from manufacturers like Bryant and Goodman to smaller units that sit in a windowsill. There are also fans to consider a well and countless options to choose from, whether you need something sleek and modern or just want a powerful fan.

Ceiling fans are arguably the most popular style found in homes across America. They can be quite expensive, but they can also be the centerpiece of a room. Some of the best ceiling fans also have lights that can illuminate large rooms – something you won’t get from an AC unit or tower fan. While there are thousands of styles to choose from, all have one common problem you’ll encounter eventually. A ceiling fan making noise…

A grinding noise from a ceiling fan will definitely get your attention, but is it actually grinding or more of a scraping sound? That is a question that can keep you up late at night, as it can be challenging to diagnose a noise problem from ceiling fans. If you have a ceiling fan that clicks, rattles, or makes a humming noise, you have come to the right place.

Whenever a fixture, appliance, or gadget in your home is giving you issues, it’s always a good idea to know a little more about it before attempting a repair. Thankfully, ceiling fans are simple devices, and something most homeowners can tackle. They aren’t necessarily easy to install, but they can be incredibly easy to fix once you understand the parts. 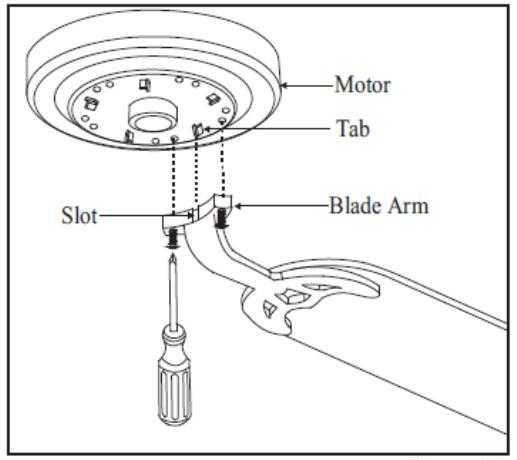 The blades are one part everyone will be familiar with, and they are connected to an arm or bracket. Generally, a set of small screws hold them in place. The motor that drives those blades lies above them and is covered by a housing. Next, there is a small cylinder that looks like a short pole called a down rod, which is followed by the canopy.

A canopy can be decorative or plain and hides things unsightly things like mounting brackets, hanger balls, and wiring. Ideally, you’ll never have to go that far to fix a ceiling fan making noise, but it all depends on the cause of the clicking noise or scraping. If your ceiling has a light, you may need to remove the globe and a few screws as well. Keep in mind, this is how most standard ceiling fans are designed, so other styles may have a few additional or unique parts.

DIY or Call in a Pro?

Before we go any further, it’s time to think about whether you can do this yourself or if it’s time to call in a helper or handyman. Unless you’re incredibly tall or live in a hobbit house, you’ll need a step stool or ladder to reach the ceiling fan. Vaulted ceilings or anything above the standard height can be an issue as well.

While plenty of homeowners have stood on beds or countertops to change a light bulb, you need something stable beneath your feet if you’re going to work on a fan. It’s also important to remember that ceiling fans can be heavy. If you take something loose or go a little too far with your DIY effort, you could end up in a precarious position.

That said, if you ever detect a burning smell coming from your fan or see sparks, turn it off and call a professional immediately. Do not attempt to fix it yourself.

How to Stop a Ceiling Fan from Making Noise

The first thing you should do to stop a ceiling fan from making noise it to thoroughly look it over and ensure it’s performing as advertised. Over time, screws can become loose along with other components, which can cause wobbling or other issues. One of the biggest problems comes in the form of dust, which means you may simply need to give your fan a proper cleaning.

If your fan isn’t wobbling and everything appears to be intact, take a look at the top of your fan blades. If the blades and the upper area of your ceiling fan is full of dust, you’ll want to tidy them up before going any further.

If you have the manual from your ceiling fan, there will be a section on maintenance with cleaning tips more often than not. If that isn’t an option, you simply need to get something to remove the dust, whether it’s a vacuum attachment, paper towel, or something a bit more interesting…

One of the more serious issues you can encounter is a grinding noise or squeaking noise, as that can mean there’s a problem with the motor. A loose blade or excess dust is easy to remedy, but motors can be tricky to deal with and not necessarily cost-efficient to replace or repair.

Grinding or squeaking can be from a bearing in the motor. When it becomes dry or unlubricated, a motor will have a hard time turning smoothly, which can cause a grinding noise.  Dry bearings are fairly common as well, but not something you can just soak in WD-40.

That’s a bad idea considering it’s not an oil-based lubricant, and it’s always best to stick to the manufacturer’s directions. How to oil a ceiling fan depends on the style of fan, however.

Systems with sealed bearings shouldn’t need to be oiled because of the way they are designed. Older fans, especially models 20-30 years old, may have a hole for oiling. The easiest way to figure out if your fan can be oiled is to check the user manual if you have one or by simply looking up the model up online. Grinding noises can come from other issues, but bearings are the most common cause.

With humming noises, it can be the motor or an electrical issue. A humming or buzzing noise could be something simple like a defective receiver or a bit more complicated, like the wiring in your home. That can be a cause for an electrical hum, and so can an overloaded circuit breaker.

In either case, you’ll want to call a professional. A humming noise from your ceiling fan can be hard to locate, but if you have a light dimmer switch on the fan for the light, that’s an excellent place to start. If your fan has a globe covering the light, make sure there’s not an angry insect inside, causing a buzzing noise. It happens more often than you’d think.

Do you hear a rubbing noise coming from your ceiling fan? That’s one of the easier problems to fix, and the same can be said for scraping noises on ceiling fans. This noise comes from two objects that are too close together and is typically the result of friction. That means you need to check the area around the housing and motor to see if you can pinpoint the source of the rubbing sound coming from the fan.

A rattling noise or clicking noise can drive you absolutely insane in your car, and people have spent weeks trying to figure out where the rattle is on a refrigerator or AC unit. Well, fans are another item known to rattle when something is out of whack, and it can be difficult to locate the source of a mysterious click in some cases.

This is another time when you’ll want to check for loose screws anywhere on your fan. When something is loose and moving at high speed, it’s never a good thing, but it can also cause a rattling noise from your ceiling fan.

Check the blade brackets, and also take a peek under canopy cover a well. Anywhere there is a screw, there’s also a chance it could be loose, and you’ll hear a clicking noise or rattle. Just be sure it’s not a bug in the bowl covering the light on your ceiling fan.

How to Fix a Wobbling Fan

In our experience with ceiling fans and from most consumer reviews, the top problem with ceiling fans is wobbling. A wobbling can cause rubbing noises, scraping noises, and clicking noises as well. It can also happen for a variety of reasons, but you don’t necessarily need to call in a professional handyman to address the situation.

Dust and loose screws can throw a ceiling fan out of whack. If you cleaned your blades and your screws are tight, there is another issue at hand. If it’s a warped blade, you may be able to gently get it back on track. The blade holders can also be bent, however, which isn’t quite as easy to fix.

To check for warped blades, you can hold measure the distance between the ceiling and blade tip with a measuring stick one by one while manually rotating the blades. If they have been removed, you can stack them on top of one another to check. As for those holders, you can try to bend them but may break them if they are too thin or brittle.

If everything with your ceiling fan seems right as rain, that usually means your fan blades are out of balance. That’s where a balancing kit can come in handy, although it can seem a little daunting at first. Before you buy one, make sure your fan didn’t come with one. It’s not uncommon to find them included with newer ceiling fans, so locate any accessories before picking up a kit.

We’ve seen plenty of wobbly fans make rubbing sounds and clicking noises as well. If your fan has a cause of the wobbles, the two Randys can have you back on track in no time once you have a balancing kit.

Q: My fan is firmly attached with no issues I can see, why is it still noisy?

A: It could be because of how your fan is mounted. When mounted on a joist, noise can be amplified, which makes otherwise unobtrusive noises far more noticeable.

Q: My ceiling fan runs slower than usual, is it broken?

A: It may need some work or replaced if it’s an inexpensive fan. Fans can run slow when the capacitor begins to go bad, and it’s not something you can check unless you’re comfortable dealing with electricity.

Q: What’s the first part that usually breaks on a ceiling fan?

A: The pull cord area unless you use a switch or have a control system. Manufacturers have gotten better about that over the years, but it’s still a significant point of failure on many mediocre fans.

Q: Can I just use a leveling kit with a warped blade?

A: If a blade is too warped, it can damage other components on your fan, so it’s best to replace them if possible.

A: Check the wall switch, and then the reverse switch on the fan and make sure it’s firmly locked into the direction you need. If that’s not the problem, check the circuit breaker for the ceiling fan.